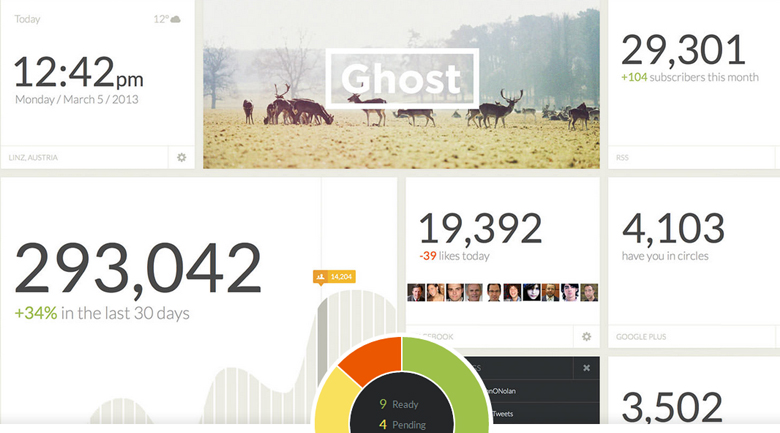 Ghost: first exciting thing to happen to blogging in years

Former Deputy Head of the WordPress User Interface Group and well known blogging thought leader, John O’Nolan has pulled together top talent to create Ghost, a new blogging platform in light of the renowned WordPress platform becoming more of a content management system and website platform and too complicated for some users to adopt or manage. After months of waiting, users may now sign up for their own Ghost blog, starting today.

O’Nolan explains, “Every new technology has an expiration date, great technologists believe in the right tool for the job, but the fact remains that the relevancy of a technology is what tends to fade over time as technology re-invents itself at a faster pace each year. Right now the leading open source new media publishing projects are driven by PHP communities. It’s easy to see why, with a well-established and vibrant ecosystem, the PHP community is strong. But, it comes with its limitations, and recently other technologies have taken the lead on innovation.”

Read also: Ghost – blogging platform could be the next WordPress

Ghost will launch as a minimalist, elegant platform focused exclusively on blogging, and the team will file as a non-profit organization, and they say their goal is to do it for the passion, not the cash, a sentiment that has captured the technology community’s attention.

While Ghost will not replace WordPress, and it would never work for a publication of the size of AGBeat, it will very likely become a popular alternative for die-hard bloggers, minimalists, and people new to the scene. It is open source and free to use and completely customizable.

Ghost fundraised through Kickstarter initially, so the 6,000 people who pledged funds got early access to Ghost prior to today’s launch for all. For now, users will have to download the source code and host it themselves. If that sounds like a foreign language, don’t worry, O’Nolan tweeted that in the coming weeks, they’ll have a hosted service ready so you can get set up in a matter of a few clicks.

The Ghost platform is definitely the next big thing in blogging – if you’re not familiar with it, check out O’Nolan’s explanation below: