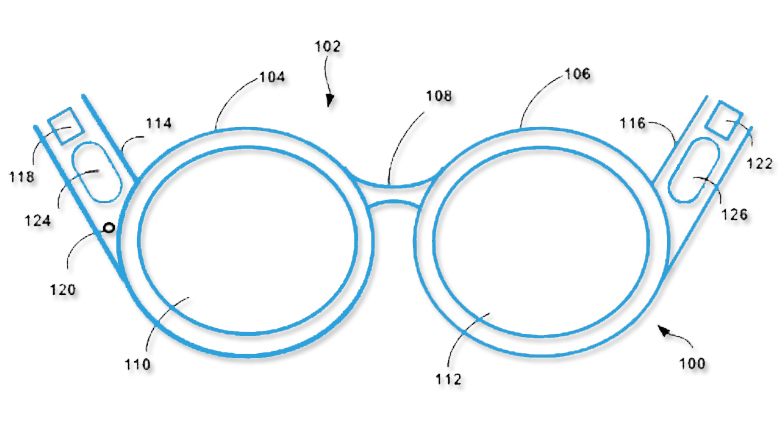 As the patent battle heats up between Apple and Google, both seeking to out-innovate each other, a new patent application has grabbed headlines as more details about the Google Glass project announced last year come forth.

According to the BBC, “A test report describes video playing on the device alongside audio running to a ‘vibrating element.’ The description tallies with a patent filing suggesting it plays sound via ‘bone-conduction’ tech rather than earbuds. Developers are due to receive a test edition of the headset later this year.”

Federal Communications Commission (FCC) documents describe data being sent to the small glass screen display via Bluetooth and wi-fi using a radio unit, and the device is able to store video files internally. The glasses are recharged through their frame, but what is capturing attention is that the device may be used without headphones, keeping the wearer aware of sounds around them, but able to hear noise through indirect bone conduction, relying on skull vibrations to deliver noise that only the wearer would hear.

The patent describes the device as a “wearable computing device with indirect bone-conduction speaker,” and is being assumed to be one of the final pieces needed to make the Google Glasses market-ready for a possible late 2013 launch, as Google founder Sergey Brin has famously been sighted on the subway wearing them in the wild.

While the Google patent is not for bone conduction, as that already exists, it does connect bone conduction to a wearable computing device, aka the Google Glasses. We will be watching to see how this completes the company’s project as they approach their launch.