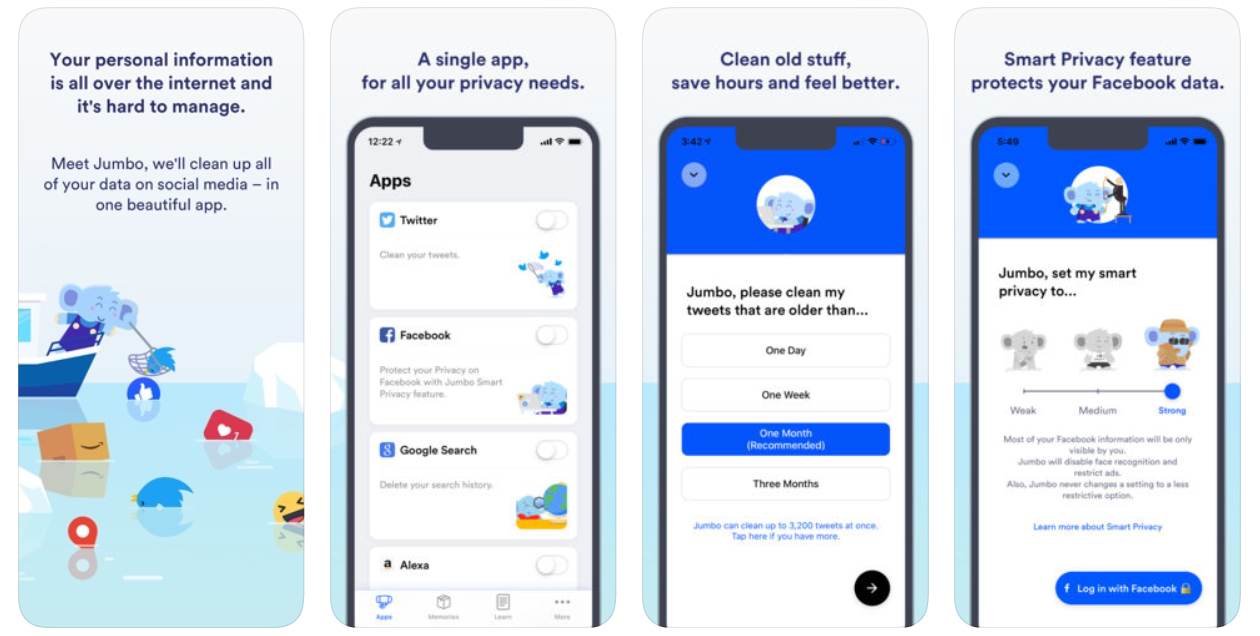 Like virtually every other online outlet, we’ve both talked about web and app privacy and complained bitterly about the invariable fall of online rights. However, while we’ve been talking the talk, a company called Jumbo has been cyber-walking the cybersecurity walk.

Jumbo – an iPhone app focused on keeping your online trails as private as possible – has a simple premise: allowing social media users to manage their online privacy with a few taps rather than having to navigate each individual service’s infuriatingly complex labyrinth of privacy settings. Instead of having to visit each individual app you want to clean up, you can simply open Jumbo, select your preferences, and wait for the magic to happen.

Jumbo’s features range from cleaning up social media timelines and old posts to erasing entire searches or resetting privacy information; while it currently varies depending on the social media service in question, Jumbo’s one commonality is its simplicity.

The star of Jumbo’s presentation is its aptly-named Cleaning Mode—a feature which allows users to wipe anything from tweets to old Google searches. Jumbo’s developers also assure users that the ability to remove things like Facebook photos is in the works, making Jumbo’s efforts to clean up your digital life that much more ubiquitous.

It is worth noting that some users have encountered limitations on the number of tweets they can delete, so you may have to batch-remove information until this bug is resolved.

When using Jumbo, you’ll also find an encrypted back-up feature that allows you to download—or use cloud storage for—old photos and files. It isn’t as dramatic as Jumbo’s primary functions, but anyone looking to make a dent in purging their online footprints will surely benefit from being able to encrypt and save their information for a rainy day through one interface.

At the time of this writing, Jumbo is prepared to assist with privacy options related to Facebook, Twitter, Google, and Amazon Alexa, but the app’s developers intend to incorporate support for platforms such as Tinder and Instagram in the future.

While Jumbo is currently restricted to iPhones, Jumbo’s maker Pierre Valade has mentioned that an Android version is “on [their] list”. In the meantime, iPhone users should strongly consider taking Jumbo for a spin.