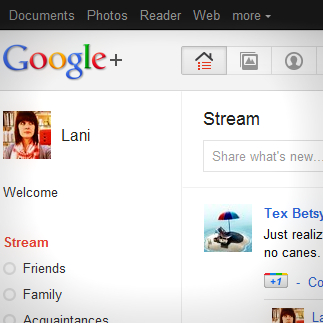 Google+ launches, the web lights up

The video above demonstrates the functions of the invitation only beta site Google+ (said “Google Plus”), Google’s newly launched social network which we have been predicting and waiting for for years. Today, rather than rehash the noise you’ve heard online, we’ll tell you why you should pay attention to Google+.

You’ve probably seen people in your Twitter or Facebook stream bragging about having invitations, and if someone is offering, take them up on it. Otherwise, request an invite, we are seeing access granted fairly quickly, even without a personal invitation.

Over the years, most of us on staff here have developed a deep cynicism of various social networks and tools as they are a complete time waster when used poorly and we’re seeing so many real estate professionals sink time and money into poor social strategies online. We cover tech news in a way that arms agents with the ability to effectively use the networks, but the truth is that most fail at it.

How not to fail

Realtors jump on Facebook and begin posting listings in their personal stream. Fail. Agents hop on to Twitter and follow a bunch of “I follow anyone back” people to pump up their numbers. Fail. Neither of these things connect with social network users effectively.

Google+ looks and feels much like Facebook and trust us, the ads are coming down the road on Google+. Remember when the “+1 button” launched? That was a tricky move on Google’s part as they launched the ability to “like” any website and have now literally turned it into a like button on their social network’s status updates. We are like others in that we are using Google+ now as our clean slate for social networking, a purely personal network since we’ve all learned difficult lessons as we fumbled through the early days of Twitter and even Facebook.

But what is most important to you is the connection your business, right? Well, Google+ matters to your business not only because there is pressure to be present as much as possible online, but because we suspect that Google will begin rewarding the links in status updates that are given a “+1” (like) by users with higher ranking in search results. It is possible that users that Google deems to offer quality content (or are the originators of content) could also be rewarded. Google’s production of a social network after observing the web culture define itself prior to their jumping in will most likely change search results over time and make them more personalized to the user.

In this article:google, google plus, News, real estate social media