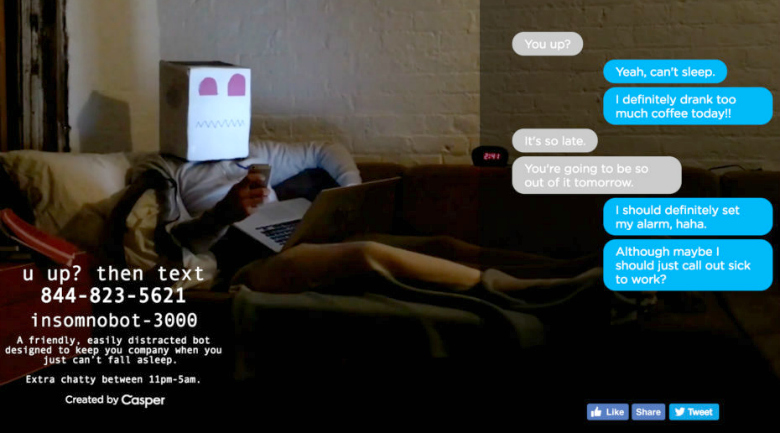 Trying to catch your ZZZs

On those rare nights when I’m tossing and turning and just can’t get to sleep, who’s awake to keep me company? My wife? I wish! My cat? Yeah, right! Late night television just doesn’t do it for me.

Read also: Imperson helps you create an on-brand chatbot for your website

What I need is someone to talk to. Like that’s gonna happen at 3:00am. Fortunately a company devoted to quality nap time has heard my plea for help and has unveiled just what the doctor (or in this case the insomniac) ordered.

Just an SMS away

Casper touts itself not just as a retailer, but as a company based around the entire idea of getting a good night’s sleep. The startup’s main product is mattresses, but it also makes pillows and dog beds, publishes a sleep-centric blog, and hosts an annual sleep symposium.

Casper is rolling out the red carpet for it’s very own one-of-kind chatbot targeted toward people who have trouble sleeping.

Just send it a text and it’ll talk with you much in the way a human would. At least, that is the hope.

Casper’s bot, called Insomnobot3000, is accessible via text and represents months of secretive development and sleepless nights by a 10-person team spanning Casper’s tech, design, data, and creative departments. The goal: make a bot that made 3 a.m. a little less lonely.

Programmed to say what?

Casper’s development team relates that the team “built out a wide range of responses, honing in on the oft-repeated subjects, and used algorithms to create a bot personality the company describes as “universally friendly.” The Insomnobot3000 will understand common phrases and pop culture references which makes it relevant, so if you can’t sleep and want to talk about the lastest episode of Luke Cage, the Insomnobot is ready to talk about it.

Talk sleepy to me

The reality of chat technology is that time will tell what kind of usage Casper’s bot gets and how helpful a mass audience will actually find it. And as with every other chatbot ever made, it’s inevitable that people will use it for some pretty weird or lewd stuff. In Casper’s case, relates Inc, all conversations are private, so what goes on at 3am stays at 3am. To its credit, Casper stresses their bot “isn’t a gimmick but rather a way to give customers ‘great experiences’.”

Insomnobot3000 is free to use. But it’s probably not unreasonable to assume that interacting with the bot via your phone offers the company a way to contact you about promotions. And for the record, Casper pulled in $100 million in sales last year and is on pace for $200 million this year.

And if that’s not enough to help you get a good night’s sleep, nothing will.

In this article:Casper, chatbot, Marketing, mattress