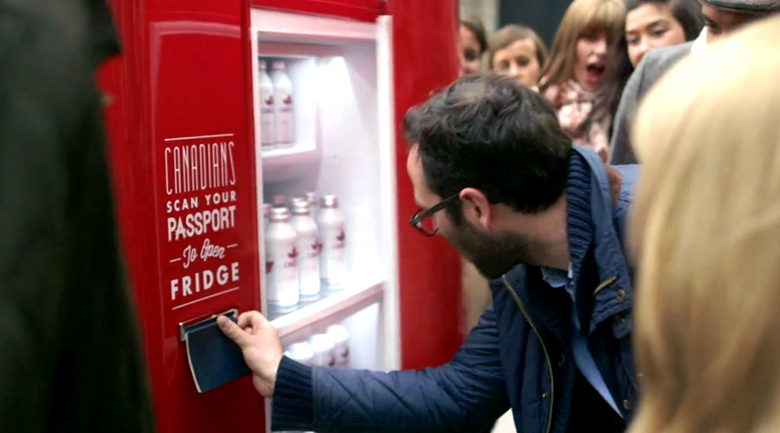 Free beer for everyone. Except non-Canadians.

In an effort to expand their brand in Europe, Molson Canadian hired the Rethink Canada ad agency to spread Canadian pride and a love of Molson across the continent by standing up beer fridges filled with free beer in dozens of European hot spots.

The trick, however, is that the red beer fridges could only be opened by a Canadian passport via a quick scan, so people in the area had to interact with the chillers by shouting into crowds, seeking anyone from Canada. As shown in the video below, all involved had a grand time and will have a lasting impression of Molson Canadian:


Read also: How to execute humor in video ads properly

Incorporating cleverness into your brand

When you hear that an ad is clever, you usually think of humor, but it can often be so much more than humor, it can be interactive, memorable, fun, but most of all, it leaves the consumer with an “aha” or “ah” moment, which is far more memorable than a list of product specs, because invoking emotions is far stronger than regurgitating facts at a viewer.

Cleverness does not have to be expensive like Molson’s free beer campaign, rather as simple as a blog post on your website wherein you measure the metrics of effectiveness (number of views, time spent reading the post, etc.).

Creating memorable ads has been a global desire for hundreds of years, and with the advent of social media, the race has gotten even hotter, so consider what your consumers want most and cater to that, but mostly, give people a reason to talk about you. Molson didn’t just get people in a city square to chat about the beer, the enthusiasm spilled over on to Twitter, Facebook and the like, and the word was spread beyond the local plaza.