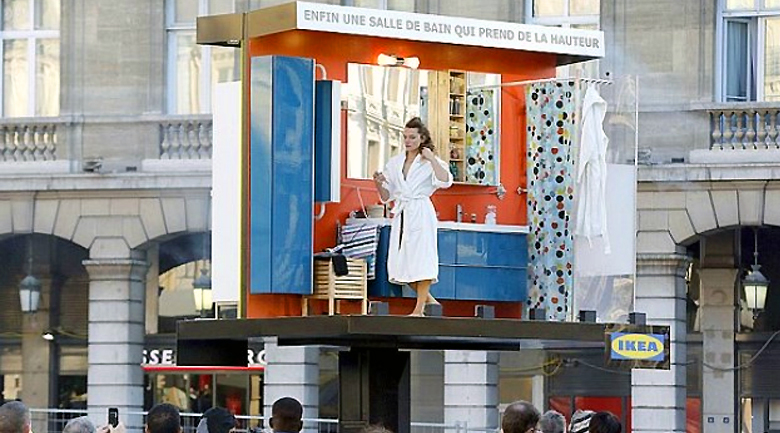 Swedish furniture company, IKEA, has grabbed the attention of travelers to and from the Saint Lazare train station in Paris, installing “living billboards” or “3D billboards” with models interacting with functioning bathroom sets built into a billboard above travelers’ heads.

The models do not interact with the public, rather walk around in robes, brushing their teeth, doing their hair and makeup, and so forth. While the setup is absent of toilets, the implication of the demonstration is that all of your bathroom needs can be met by the furniture brand.

The billboard installation is two-sided so the actors can be seen from both directions, and they do not interact with each other or with people passing by. Atop the installation, the sign simply says, “At last a bathroom that rises above (the rest).”

IKEA has been known for their creativity, earlier this year turning two waiting rooms at an electric car rental company in Europe into bathrooms, whetting their appetite for their extended interactive bathroom scenes, promoting one of their lesser known lines.

The brand has also fascinated fans with their 2014 catalog which is laced with augmented reality wherein a user with the IKEA app on their device can simply place the catalog on the floor where a potential piece of IKEA furniture would go, and on their device, they can see a virtual version in real time, and with proper dimensions, as if the piece was sitting right there in their room.

While your brand may not have the budget or bandwidth to do something as large as an interactive billboard stocked with actors, but you can find inspiration in their willingness to experiment and to get creative, but above all, they do an amazing job of demonstrating their product in a useful way, without the sales pitch or infomercial attitude.