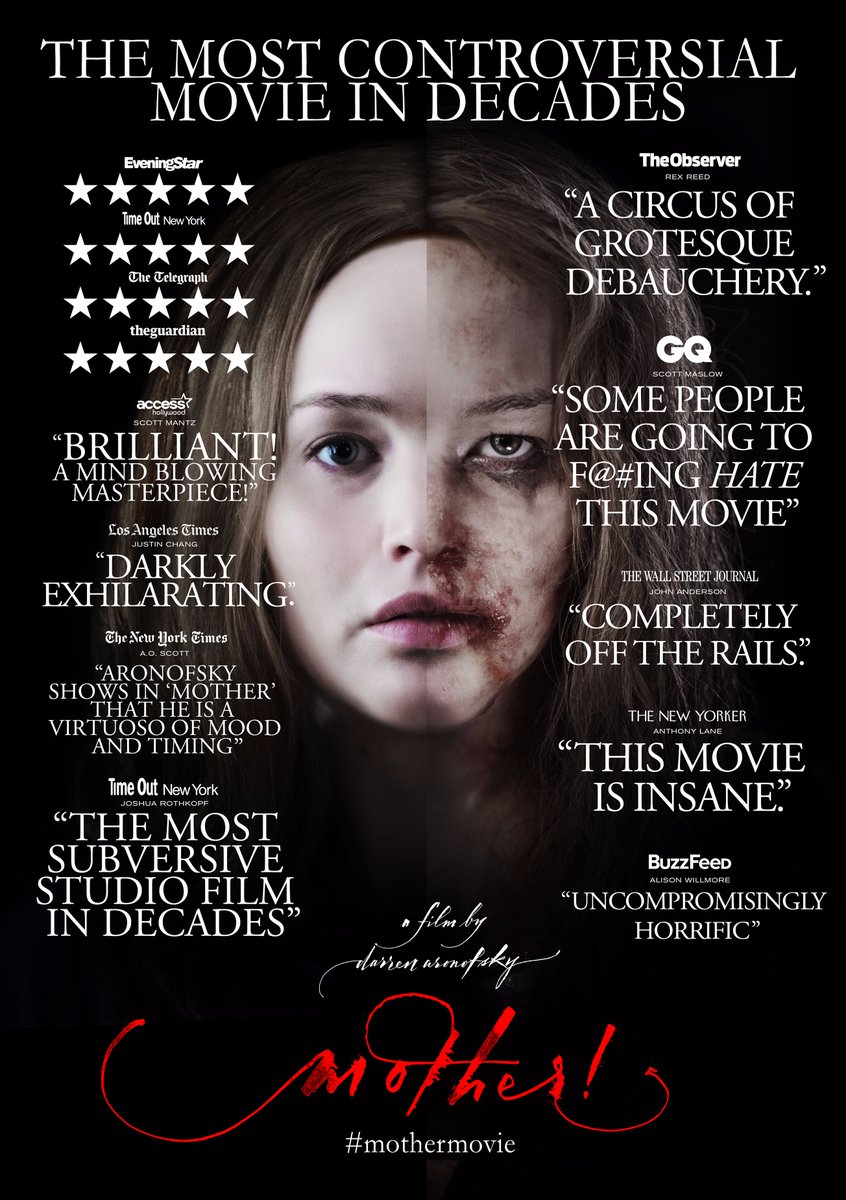 After a third weekend in wide release, Darren Aronofsky’s “Mother!” has had no shortage of poor reviews and angry viewers. CinemaScore gave the film a rare F. One facet of the film’s second week campaign is the printing of a new poster for “mother!” that has positive, negative, and mixed reviews printed on it.

Read also: LL Bean just stole the show with their invisible ink ad in the NYT

The most positive reviews are written smaller than the “controversial” reviews. The marketing team at Paramount, the studio and distributor producing the film, decided to use the film’s divisive nature to full advantage in order to boost ticket sales.

The premise of “Mother!” scarcely encompasses its plot nor why some viewers dislike the film. “Mother!” stars Jennifer Lawrence, the titular Mother, and Javier Bardem as a married couple in a beautifully restored, but extremely remote home.

After unnerving strangers–played by Ed Harris and Michelle Pfeffier–arrive at their home some…weird stuff happens to Lawrence and Bardem. No spoilers here, just be prepared to hold on your arm rests by the time the film gets into its third act. Needless to say, lots of people actively dislike this movie.

Is that still a thing?

The biggest question of all here is if the old adage “all press is good press” still applies, especially when coming down to the bottom line. “Mother!” was made for a production budget of 30 million dollars, which is not blockbuster range, but certainly more than the 4 million dollar budget of 2016’s Best Picture Winner, “Moonlight.”

The production cost of “mother!” is ultimately more than a typical indie movie, and it has the support of the traditional Hollywood studio machine.

The marriage of big Hollywood money with the tone and content of an indie movie is an interesting case study, especially when incorporating the concept that “everyone hates this movie” into the reason why you should see it. The big question: has it worked in getting tickets sold to see the film?

We’ll see how it plays out

According to Chris Anderson, author of The Long Tail: Why the Future of Business is Selling Less of More, the second weekend drop for box office sales is a well recorded phenomenon. The average contemporary film has a drop of approximately 50 percent due to the fact that “moviegoers being able to better identify mediocre and bad films through more information, both from more reviews and greater word-of-mouth.”

So far, “Mother!” has received a box office drop of 56 percent. Considering that some poorly received movies receive drops of 80 to 88 percent, this seems fairly standard in comparison. However, it appears from that Paramount’s attempt to spin the mixed reviews into more sales have not given “Mother!” an edge on the competition. Regardless of if “Mother!” makes back its budget, it’s still a controversial piece of cinema that will keep everyone talking.

In this article:Marketing, Mother!, movies, The News