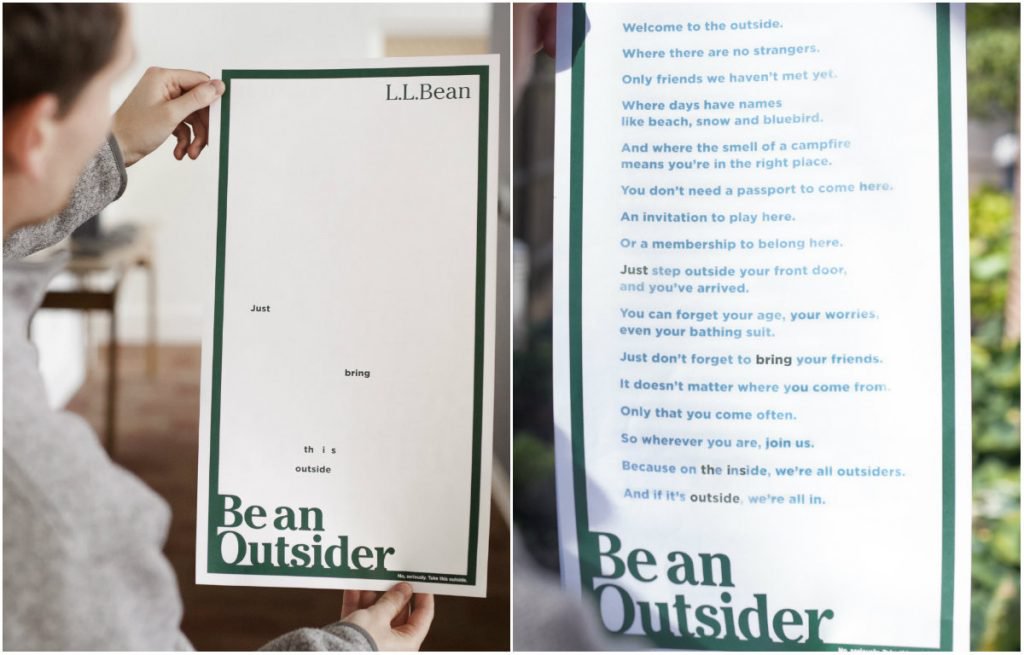 While LL Bean, the makers of those duck boots that are perpetually on backorder, is an American brand institution, you may not be as familiar with its marketing campaigns. Portland’s The Via Agency is looking to change that.

Read also: Ads are universally disliked, but which stand out?

The agency recently scored a victory for their client by publishing an eye-catching newspaper ad in The New York Times. Upon first inspection, only a few words are visible, such as “Just bring this outside” or “No. Seriously, take this outside.” When you oblige the message and hold the ad up to the sun, the rest of the message reveals itself, which calls the reader to embrace the beauty, accessibility and camaraderie you can only find in the great outdoors.

While the great outdoors is one of the most universally shared resources amongst human beings, we increasingly live our lives surrounded by walls and engrossed by screens. Because of that, there’s now a certain contrarianism to engaging with life outside of a box. By tapping into the tagline “Be An Outsider,” LL Bean sticks by its brand image while subtly infusing a sense of exclusivity and cool into their essence.

That’s not an easy feat when you sell lots of functional equipment and clothing.

The ad also establishes some brand goodwill through a focus on a cause over a product. There is no mention of LL Bean products anywhere in the ad; it serves as a simple call to get people to go outside. The tactic is a familiar one; REI built their entire Opt Out campaign around it. It is also effective at grabbing attention and making the end reader feel good about it.

The ad is also effective due to the earned media from its innovative approach; in addition to this write-up, the ad also went viral on social media. When AdAge wrote a feature about the ad, that article was their most popular story on the day it was published.

That conversation starts with the printing process.

Via reportedly contracted a company called Chromatic Technologies Inc. in Colorado to produce the inserts, which were not actually printed on New York Times newsprint. For reference, this is the same company that prints the Coors Light bottles and cans with the “cold as the Rockies” destination.

This unique creation process, combined with the stand out messaging, help the ad earn that extra exposure within the ad industry. All those extra impressions certainly don’t hurt the ad’s reach numbers!

All in all, creative methodology is still a great way to get extra brand attention, so long as you have a well-crafted message behind it.

In this article:advertising, invisible ink, ll bean, Marketing, The News