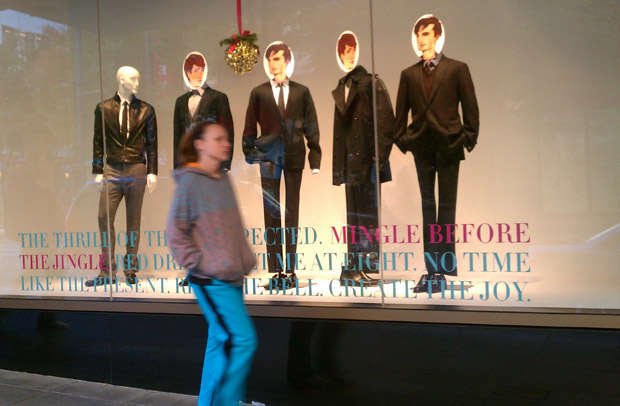 Nordstrom window in Seattle as captured by SeattlePI.com.

Nordstrom window in Seattle as captured by SeattlePI.com.

We take back our praises…

We recently praised Nordstrom for their choice to refrain from decorating their stores and windows prior to the holiday season, lamenting the fact that most retailers added Christmas decorations, wrapping paper and the like, as early as September.

Nordstrom was applauded for placing signs in their store that notes they will enjoy one holiday at a time and will not decorate for the holidays until November. Consumers flocked to Twitter and Facebook to praise the company, expressing relief that at least one retailer isn’t going against the natural order, and the word of mouth campaign was born. Consumers blogged about it and told friends, and with only the cost of (a) printing a few flyers per store and (b) not decorating for Christmas until November, a nearly free pro-Nordstrom campaign was born.

Alas, it didn’t last forever. After several years of going against the trend of decorating early, Nordstrom in Seattle has a variety of holiday-looking items like holiday bells and the words “mingle before the jingle” on the window display. Although unquestionably Christmas related, a Nordstrom spokesperson told SeattlePI, “The window decor downtown is commemorating the upcoming social season — not the holidays,” and the policy remains in place.

Consumers again have taken to criticizing Nordstrom on Twitter and Facebook in the same word of mouth fashion as they originally supported the company.

The word of mouth knife cuts both ways- companies can garner great online visibility when they do something consumers see as favorable, but when they go back on that promise in any way, backlash can be severe. There isn’t a loud call to boycott the company and it is doubtful that the backlash will impact their bottom line, but for many, the brand made a promise and broke it, like other brands, so confidence in the brand is definitely shaken and they’ve lost the momentum of the “we’re not decorating” campaign.

In this article:Marketing, News, word of mouth marketing