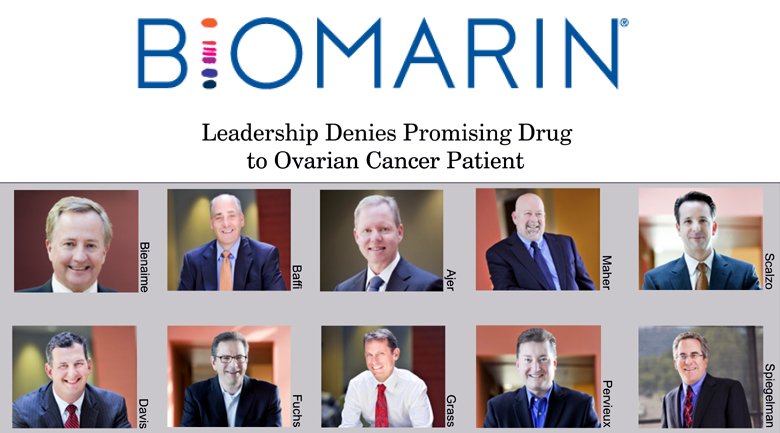 Reply-all happens to the best of us

Everyone has hit “Reply-All” on an email by accident at one time or another. It is not often, though, that the CEO of a public company facing a full-blown media crisis emails his strategy to the people he is trying to avoid.

Last week I discussed the predictable crisis that BioMarin pharmaceutical company is heading toward and its ethical obligation to at least try to avoid that crisis. Since that article was published, BioMarin seems determined to prove me prescient.

It is difficult to imagine a company less prepared for a crisis of its own making as BioMarin circles its wagons to wage a media war against an ovarian cancer patient named Andrea Sloan who has only days to receive treatment.

This week, we will look a little deeper into the company and their CEO’s strategy revealed in his “Reply-All” email on which he included Andrea Sloan’s supporters, and which was subsequently provided to me.

A deeper dive into this CEO’s crisis “strategy”

As any crisis management professional will tell you, the best way to avoid a crisis is to plan ahead. Large companies with potentially dangerous products – like oil companies – regularly have intricate and well developed crisis management plans in place. Unfortunately, most small and medium sized businesses have no active plan. BioMarin is no small company, however, and the current issues they face are not new to the company.

A pharmaceutical company with over 1,000 employees located in offices all around the world, BioMarin has had over $500 million in revenue in the last twelve months. There is no excuse for this company, which focuses on developing drugs for rare diseases, to not have a plan in place for dealing with the problems they are most likely to face.

Earlier this year, BioMarin faced pressure in the UK when a 17 year old named Chloe Drury applied to be part of a trial as a last hope in her battle against cancer. The trial was arbitrarily limited to patients 18 years and older. Chloe was three months shy of turning 18 years old and her doctors and family approved of her use of the drug, but BioMarin forbade her inclusion in the trial.

Soon after her 18th birthday, Chloe passed away. Chloe’s mother is now leading a fight for new legislation to be passed in the UK that will help others in situations like that her daughter endured.

BioMarin faced some scrutiny because of that situation, so one would think that even if they had not had the foresight prior to the efforts by Chloe Drury’s family and friends to focus attention on their behavior, that afterward they would have gotten prepared in case a similar issue ever arose. The simplest solution would have been to develop a compassionate use policy with clear guidelines and a plan to be able to effectively communicate the policy and rules.

Instead, their promotional materials say that they support compassionate use policies – they just seem to very rarely actually implement them for patients. Compassionate use is described in this article in the Washington Times.

BioMarin’s CEO Jean-Jacques Bienaime is not a man of many words if this one email is typical of his normal communication, but his meaning is clear. After receiving an email from some of Andrea’s supporters to the executives in BioMarin imploring the company to establish a compassionate use policy, Bienaime hit “Reply-All” from his iPhone and apparently did not realize he included Andrea’s supporters on the reply. Let’s take a look at the three sentences he aimed at other leaders of the company on September 8, 2013:

Why this reasonable response is unreasonable

While this argument may sound reasonable – the idea that BioMarin should point out that there are other drugs in this class available – in truth, this is a callous and calculated comment. The drug Andrea Sloan is trying to get from BioMarin is a PARP inhibitor that is thought to be her last chance against the precise type of cancer she has. BioMarin’s BMN673 is a PARP inhibitor that the company has been excitedly telling investors is a drug that is far more effective than other drugs in its category and safer for patients because it can be given in dramatically lower doses.

Because of the extensive, traditional treatment Andrea has faced in her battle against cancer since 2007, her body simply cannot tolerate other drugs on the market. Due to the results of trials BioMarin has touted to investors and scientific journals, Andrea’s doctor has indicated that BMN673 is Andrea’s best and possibly last chance. In extensive communication Andrea has had with the company, this set of parameters has been made clear.

The “Hank” to whom Bienaime addresses the first portion of the email is presumably Henry Fuchs, M.D, BioMarin’s Chief Medical Officer who is included on the email and who is well aware of the unique value of BMN673 to Andrea and that other drugs will not work. It is clear from the sentence, though, that Fuchs actually came up with the idea to spin the company’s response by telling others that Andrea can go find other drugs even though, as a doctor, he knows this is not the truth.

The databases of ongoing trials are easily searchable and this statement either shows neglectful ignorance or a disregard of BioMarin’s own promotion of the results of trials of the drug and the unique way the drug could help Andrea Sloan. And while it is possible that the CEO of the company was simply unsure of the answer to this question, Dr. Fuchs could not be uncertain.

The previous comment did seem to offer an optimist a glimmer of hope, though, until:

Debra Charlesworth handles BioMarin’s public relations, but those relations are normally only aimed at potential investors and so far, the company’s efforts at dealing with local and national media on the issue of Andrea Sloan have proven horribly clunky and cold. Precisely the same, stock wording is used in canned responses BioMarin made to media inquiries during both Chloe’s and Andrea’s ordeals.

BioMarin recognizes that the intense media spotlight on their response to Andrea Sloan and the over 125,000 supporters she has amassed online is outside their current capacity of response and they had no plan for this event, which given their pattern of behavior, was entirely predictable. BioMarin has not spoken directly with Andrea, and instead of having their doctors talk to her doctor at MD Anderson, they had their lawyers talk to him. They have no apparent interest in resolving the issue in an ethical or practical manner, but instead have focused on spreading misinformation and spinning their position through an outside PR agency.

The answer is not hiring an agency

The fix to this problem does not lie in hiring a PR agency, but in fixing the problem which is causing the need to engage in public relations; and other companies should take note of that. And remember, public relations and crisis management are not the same. Besides, I have a hunch that there is a PR agency of about 125,000 people and growing who would be happy to go to work on repairing BioMarin’s image if they were to shift to an ethical behavior by developing a reasonable and functional compassionate use policy.

A KXAN News open records request showed that the FDA has approved 3,149 compassionate use requests over the last several years. The FDA only approves the drug once the pharmaceutical company has agreed to give it to the patient. So, in 3,149 recent cases, drug companies have said yes to patients in this situation. It is clear to no one why BioMarin has not.

Below: petition on Change.org calling for BioMarin to grant access to this life-saving drug that the FDA has approved for Sloan’s case 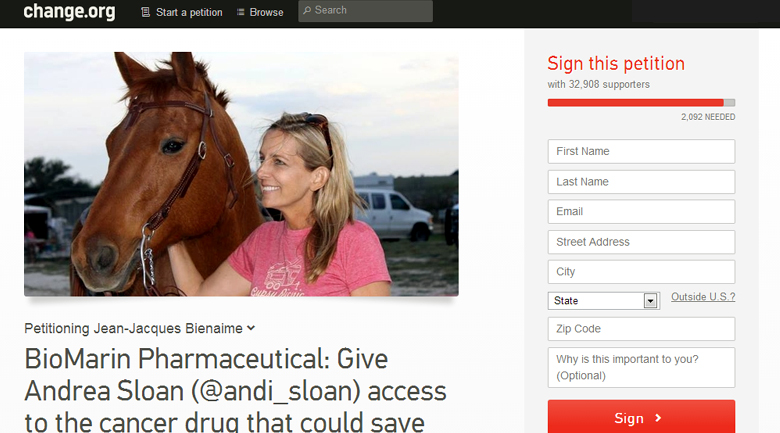