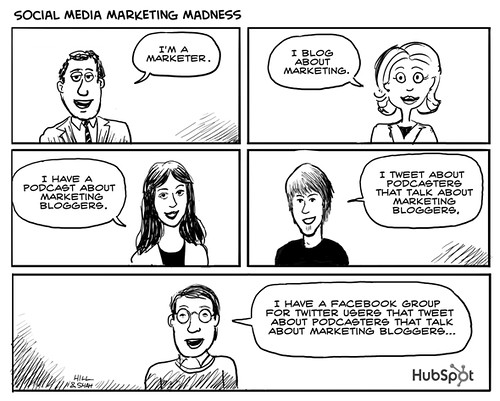 If you’re a regular reader of this blog, you probably are familiar with the benefits of permission based marketing and the benefits of using social media to reach the millions of communitites that have formed as a result of social networks, blogs, social bookmarks etc. And as the phenomenon has grown and reached greater ad greater adoption by the mainstream of society, it has gained more attention through traditional media. But like all good things, there are those who would abuse it and misuse it. Indeed, recently there seems to be an invasion by people who want to market to our online community using traditional methods.

But Some Users are Not!

They don’t blog or comment, so they aren’t trying to be trusted advisers, but they are trying to use the space for advertising and direct mail by creating large numbers of followers or “friends” and then spamming them with commercial messages though their in-boxes or their twitter API.

I recently received a follow on twitter from a real estate broker who was following 900 people, had 300 followers, and had not made one update. That indicated to me that the person was not an active member of any community that I wanted to belong to. It also indicated that his followers were not really following him, but had an auto-follow setting that increased his following without anyone caring that they were part of his “community”

So why do I care?

Because social media is the epitome of word of mouth advertising. A place where professionals can provide information to their communities, demonstrating their value to consumers rather than “selling” them on the product or service they offer. If it becomes a breeding ground for advertising and interuptive  marketing instead of permission based marketing, the waters become fouled for all of us, and our communities will find other places to talk and share and learn.

In a recent post, Seth Godin parsed it wonderfully;

Marketers have spammed, lied, deceived, cluttered and ripped us off for so long, we’re sick of it.

Selfish short-sighted marketers ruined it for all of us. The only way out, I think, is for a few marketers to so  overwhelm the market with long-term, generous marketing that we have no choice but to start paying attention again.

And that my friends and readers is the challenge we have before us. To provide high quality and high quantity content for our communities and tribes , not just pictures of listings, or direct mail newsletters through our facebook and twitter accounts, but useful information and links to great articles and videos and photos that we are interested in and would share with a fiend we didn’t want to sell anything to. Then and only then will we reconnect with the consumer as someone they choose to do business with because they are pre-disposed to trust us – and because we have earned that trust.

Social Networking: How much is too much? [Dear Ginny WTH?]

If you’re still practicing to be OCD, here is a secret I don’t typically share with anyone, but I’m willing to share with you today…

I used to be obsessed with the P-touch machine. I labeled everything. Drawers, shelves, folders, canisters, and anything that I could think of putting a label on.

But the label makers weren’t as pretty as my own handwriting and didn’t come in every color a Sharpie does, so I got the brilliant idea one day to write in light blue sharpie in my beautiful handwriting on clear tape, placed neatly on the shelves in the pantry. Visitors thought I had written on the cabinets, “what if you have to move things?” they asked. “It’s just tape, look!” I said as if I was performing a complicated magic trick.

It’s great to use this tip on files and folders so you can reuse them (especially if you have custom files or designer files), on drawers at the bottom of each section where pens and tape goes, and especially in the break room.

No more label maker, no more refill cartridges and no more mess, especially someone else’s mess! Trust me, this is an OCD person’s dream organizing tip!