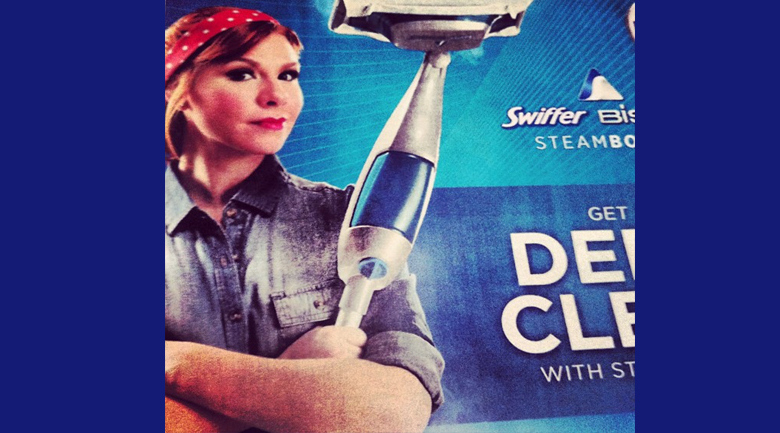 The curse of attempting vintage imagery

It was recently uncovered that the Swiffer brand invoked the image of Rosie the Riveter from the WWII “We Can Do It!” campaign that got women to work outside of the home. The new ad campaign has been highly criticized and called sexist, but is Swiffer really just trying to go vintage as so many other brands have done (and hipsters dictate is “cool”)?

Swiffer told HuffPo, “We are aware of the concerns regarding an image in a Swiffer ad. Our core purpose is to make cleaning easier for all consumers, regardless of who is behind the handle of our products. It was not our intention to offend any group with the image, and we are working to make changes to where it is used as quickly as possible.”

So, is the use of Rosie in this fashion sexist, or is it reinforcement that even housewives are badass? We asked on Facebook what your thoughts were and they were predictably diverse.

Vicki Moore asked, “where’s their creativity? I hate the ad – using Rosie that way is sacrilegious. She’s an icon and statement of the era.”

Katie Miquoe Dalrymple was equally against invoking Rosie, saying, “It’s really just extremely ignorant. I can’t imagine them putting this ad together AND truly understanding that they are advertising polar opposite stereotypes unless they were trying to lose their job. But it’s truly amazing what pure stupidity can get through a whole team of people.”

Kelly Saccomanno opined, “it’s a big *facepalm* moment of advertisers distinctly Not Getting It. Dummies. I mean, oooh, so revolutionary. Expecting women to do housework.”

Par for the course?

Whether for or against the image, perhaps this kind of “shocking” advertising is just par for the course.

“Well let’s be completely honest,” Tara Sybrant stated, “it might be a horrible use of ‘Rosie’ but the fact of the matter remains that people are talking about the ad- good or bad, it did it’s job. There is an over saturation of marketing and advertising in this world and as a marketer the day that someone starts talking about your ad, good or bad, is a good day. We need to push boundaries to be noticed, to get the job done. It’s a challenging time to be a marketer trying for the limited attention span of today’s consumer.”

Loren Nason was more blunt in saying, “big woop… keep bitching all you want about a lame ad. It just gets them more eyeballs which is all they want.”

Interesting thoughts on the subject

Rachael Glosser noted that “even strong, powerful, and independent women have to mop the kitchen floor sometimes,” so perhaps the image isn’t as negative as many are taking it.

Eve Richter said, “having a GUY in that picture would have made it funnier and a better commentary. As it is – yes, [it is] sexist, and indeed pissing on the icon’s legacy. Just stupid.”

Sharon Mays agreed. “This ad is lame and a missed opportunity to actually market the product. It’s pretty pathetic that whoever created this campaign didn’t stop to think about all the other demographics that would use this product but are not typically the target audience. Why not feature a person in his/her first apartment or home? Or someone tackling a huge mess, like a Dad cleaning up after his messy toddler? That might actually resonate a positive emotion and encourage a purchase. Using Rosie the Riveter is just stupid. This is an icon that was created to empower and encourage women to join the workforce during wartime. Now she’s promoting cleaning? Pathetic and Stupid.”

What do you think? Is Swiffer’s use of Rosie the Riveter sexist, supportive of the strength of women, or simply an expected marketing tactic?

In this article:advertising, Marketing, rosie the riveter, sexist, swiffer