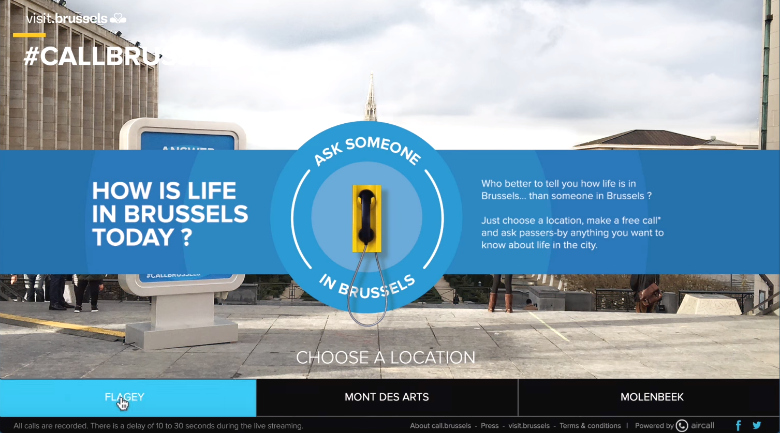 Call Brussels: Great feedback from the people who live there

The combination of the welcoming and reassuring citizens with the live camera close to the phone cabins managed to calm down the tourists, eliminating their concerns regarding the safety of the city.

It was only a few months ago when Brussels found itself facing a Level 4 alert and lockdown after the terrorist attack in Paris. Europe in general and Brussels specifically suffered an incredible backlash of bad publicity. This had a significant effect on the tourism, with people all over the world postponing their visit to Brussels.

Thing is, life doesn’t stop. Brussels is still a conduit for business and travel. So how to take the edge off of travelers’ concerns?

I’m convinced that no matter what the city or where, if you talk to the people who live there they’ll tell you about the good. Such is the basic concept of Call Brussels.

Call Brussels’is a campaign linked with the site visit.brussels, which is using the power of the Internet and the appeal of the live interaction as a way to let the local residents speak directly with the potential tourists.

An article on creativeguerrillamarketing.com explains how “three phone cabins have been placed in central places of Brussels (Mont des Arts,Place Flagey and near the newly-famous town hall of Molenbeek) with foreign tourists being encouraged to visit the site, pick the phone cabin of their choice and call a passer-by.” Both tourists and local residents were happy to try out the experiment of the campaign, leading to numerous interesting conversations with people all over the world, mentioning to Belgians how they worry about their safety in case they visit Brussels.

Statistics bear out that interaction with the citizens who make Brussels great was/is a great idea. The combination of the welcoming and reassuring citizens with the live camera close to the phone cabins managed to calm down the tourists, eliminating their concerns regarding the safety of the city.

In just 5 days, points out politico.eu, “the ‘Call Brussels’ campaign counted 12,688 calls form 154 countries, proving that the idea was more than successful. What’s more, #callbrussels was spread on the Internet, boosting the city’s image again in the most authentic way, leading to more than 9 million impressions on social media.”

Marketing to the people

The #CallBrussels website says there is no one “better than the people of Brussels to answer the questions that tourists hesitant about traveling to Brussels might have.” But in the bigger scheme of things perhaps there is a template here that every city can follow: Here is first hand proof that people are more open to real and genuine ‘reviews’ than direct promotional campaigns, feeling that this way travelers can trust the actual opinion more than traditional advertising.