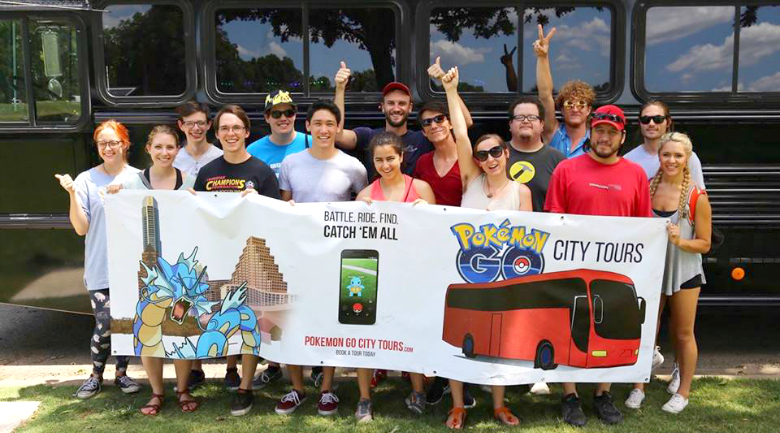 PokeTourism is a real thing, y’all

Austin is the latest of cities to jump on the Poke-tourism circuit. Yeah, there’s a circuit now. First it was Craigslist ads for “personal drivers” in Hollywood or even surrogate egg-hatching services.

Read also: Why Pokemon Go is such a big deal, anyway

But for those who might feel hiring a random driver is too dangerous, now you can go on more organized Pokemon Hunting expeditions. Meet ups abound, from the kid friendly variety to actual pub crawls.

All joking aside, Pokemon Go is already getting a lot attention for getting players to exercise and breaking down social boundaries as people of all ages and walks of life compete and cooperate to catch em all.

Q: How’d you come up with the idea of a Pokemon Go city tour?
A: The short answer: In the shower.

The night before was my first experience playing Pokemon GO in the backseat driving to get ice cream on Burnet Road. It’s unreal how much better Pokemon Go is while being driven around! You get a rush of adrenaline trying to hit every poke stop and catch as many Pokemon possible swooshing by you at 35mph (I had to ask my girlfriend to slow down a few times and loved every red light we hit). I had 100x more fun driving around and playing than I did meandering around in my neighborhood.

The next morning I found out I wasn’t alone in this enjoyment. Apparently everyone is hooked on Pokemon Go and driving. So much so that they’re putting out signs on the highway to remind people they shouldn’t be catching Pokemon behind the wheel. There are even Craigslisters advertising Pokemon Go taxi services!

It’s an insane opportunity – I was totally surprised that no one jumped on it yet in Austin!

When I woke up the following morning I just got started building Pokemon Go City Tours. I bought the domain and in all of about 4 hours put up the website, social media, and planned out the beginnings of our Pokemon Go tour – [which launched] this weekend in Austin, TX.

Q: What’s the cost for someone to take a tour?
A: We’ll be testing it out, but I would expect the cost to be the same as a normal tour – about $25-$50. Our limited first run [yesterday sold] for $50/ticket with the option to come in costume for 50% – so there’s that if you want to save a bit of money and have a better time!

Q: How do you respond to people that think PokemonGo is just a fad?
A: Oh, Pokemon Go is definitely a fad! No game will stay popular forever, I don’t know anyone who would deny it… but it’s just the beginning.

We’ve seen plenty of Augmented Realty (AR) games like Ingress pop up in the past few years. It took a widely loved game like Pokemon to really make it work on a massive scale. If we can pull this off, then it’s going to be a piece of cake to duplicate it for future AR gaming crazes.

Q: What can people get out of taking a tour? Meet new people, see new things?
A: All of the above! Nothing brings people together like Pokemon.

One of the awesome things about Pokemon Go, besides the nostalgia, is how incredibly social it is. The massive online game hosts everyone in the world, allowing players in groups to experience everything from poke-stops to catching Pokemon together.

As a bonus, the points of interest in the game coincide with all the most interesting and sometimes unknown parts of their city. We want to harness the power of this phenomenon to give people a safe, fun and air conditioned way to enjoy their favorite new game with interesting people and have an incredible experience all along the way.

Q: Anything else you’d like to add?
A: We’re planning something much bigger than just Austin. The goal is to set up shop in every major US city in the next month featuring everything from bus tours to hot air balloon rides, all with a Pokemon spin on it! The tourism market is huge (insert large obscene number) and it’s about to get a lot bigger with us in it.

The tour founder offers great insight into the explosive phenomenon that is Pokemon Go. Check them out, and I’ll see you on the Poke-paths, friends.