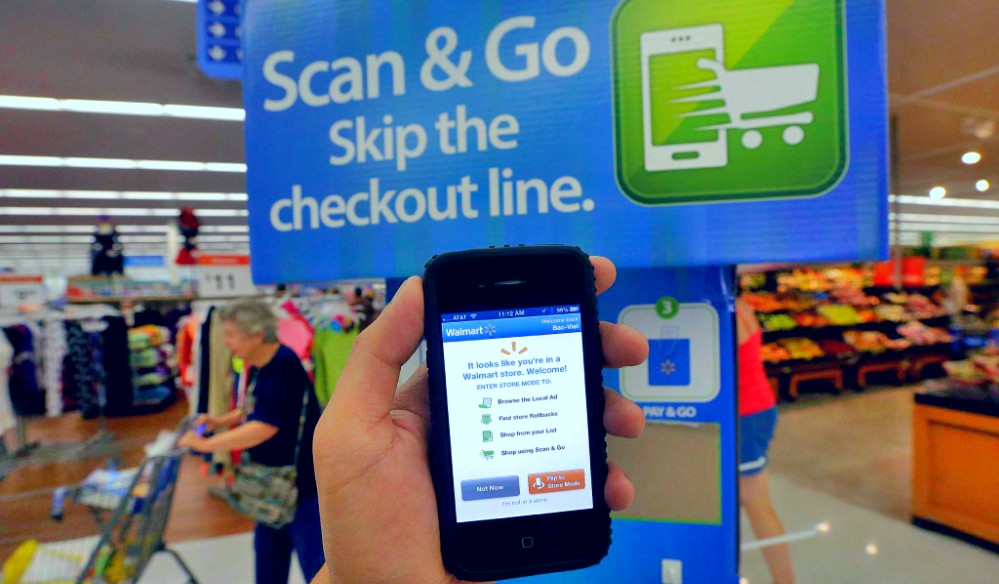 Walmart’s trying to make it possible to shop in stores while having as few human interactions as possible.

The big box retailer has introduced its “Scan & Go” app (Android, iPhone), which enables in-store shoppers to scan and pay for items all from the comfort of their smart phones. No cashiers or waiting in lines necessary.

Here’s how it works: After downloading the Scan & Go app on their Apple or Android device, Walmart shoppers go into the store, pick up what they need, scan the items into the app, and once they are done shopping, the app will total the purchase and users can pay using a debit or credit card through the app.

Scan & Go users can’t totally avoid human contact in Walmart, though. As a security measure for this otherwise very trusting payment tool, Walmart requires those who scan and pay via app to visit a store greeter on the way out of the store, according to InvestorPlace. The greeter will check your receipt against the items on your person to help prevent shoplifting.

If this app takes off, hopefully additional security measures will be added to speed up the exit process and avoid lines of shoppers waiting at the greeter’s station instead of registers. During busy times, I can’t imagine it’d be very hard for shoppers to sneak past the greeter check station, either. Not encouraging scammers, obviously, just speculating.

So far, Walmart’s digital checkout venture has been tested at 25 stores and will be rolled out to an additional 100 stores by the end of January and a total of 200 locations by the end of the year.

Walmart first tried launching this technology in stores three years ago, but it didn’t take off. But, as competitors introduce their own mobile self-checkout options, maybe “Scan & Go” has a fighting chance now.

Amazon announced long ago that it is planning a similar technology (“Amazon Go”) for use in its brick-and-mortar grocery stores (hello, now the Whole Foods acquisition is making even more sense).

Kroger is a bit further along with cashier-less shopping tech and is rolling out its “Scan, Bag, Go” service to 400 stores by the end of 2018 via it’s company app.

My only lingering question: Where do you get the bags for your purchased items? Will there be racks of them on hand at the door? Or is Walmart sneakily encouraging BYOB (bring your own bags)?

Time will tell if this catches on. Smartphones really are taking over the world – and retail spaces.