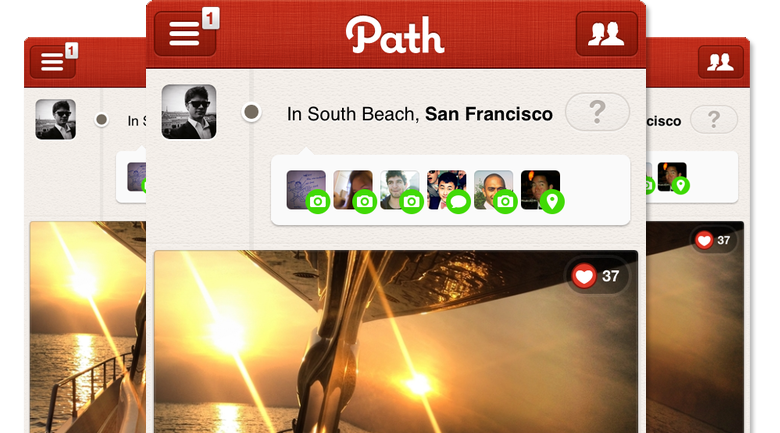 Path was launched in 2010 as a simple and private way to share life with close friends and family only, going back to the origins of why so many people loved social networking prior to it becoming mainstream – it used to feel like a small town with your closest friends, new or old. Path is an iPhone and Android app that, as demonstrated below, documents your lifestream.

We opined that Instagram would become the teens’ next Facebook, and we were right – kids flocked to the photo sharing app for two reasons. First, their parents and aunt and paw paw weren’t there yet, and second, scrolling through photos appeals to the shortened attention span more than scrolling through text updates (a la Facebook), and users can take in much more information at a dramatically more rapid pace.

Teens aren’t leaving Instagram, they’re still there, but guess who has showed up there, too? Mom. Dad. Grammy. Uncle Frank. Everyone. Every time kids fall in love with a social network, the adults eventually figure it out, and the party’s over. Not that kids were doing anything wrong, but it turns from their private bedroom with a bunch of friends hanging out to a family barbeque – they have to watch their language and pull their pants up.

But here’s the genius – Facebook acquired Instagram, so even if users stopped using one service in lieu of another, they were covered and could still make big bucks advertising to them.

Here’s where Path comes in

Path is a lifecasting tool that mimics what teens were doing on Facebook before their entire family showed up to spy on them – they were sharing status updates about everything they were doing in life (“just woke up, super tired,” “Katie just slapped Tina in the DRHS parking lot,” “so high right now, I can hear colors,” “gotta sleep, test tomorrow and I didn’t study,” etc.).

As teens tire of hanging out at the family barbeque that is now Facebook, they’re looking for an alternative, and while they’re not leaving Instagram based on family showing up, they are moving to Path, despite Path not being anywhere near new or shiny.

Read also: More reasons for the rise of the visual web

You see, Facebook has now captured all generations up to the point of kids in high school and below, and those kids are looking for alternatives that allow them to be themselves as they would in their bedroom with a bunch of friends over for the afternoon. Facebook is morphing and becoming something else based not only on user culture, but on their features, and it’s a gorgeous site with an endless number of users, but kids are looking for an oasis.

As kids seek parent-free zones, and as parents continue to flock to whatever network their kids are on, the continual shift from one network to another will continue, which also creates a new problem – an entire generation of people completely fine with immediately abandoning a social network or tool for another, which will be another challenge for the future. For those that haven’t picked up on the irony – Facebook launched as a network exclusively for college kids only.

Will Path be the permanent destination for kids? Maybe, but maybe not. It seems that the first social network that is for minors only that allows kids to be grandfathered in and take the social network with them (sign up while in high school, keep your account forever, but mom/dad can’t ever sign up) will be the true winner for this generation that simply wants their independence.

In this article:facebook, path, Social Media