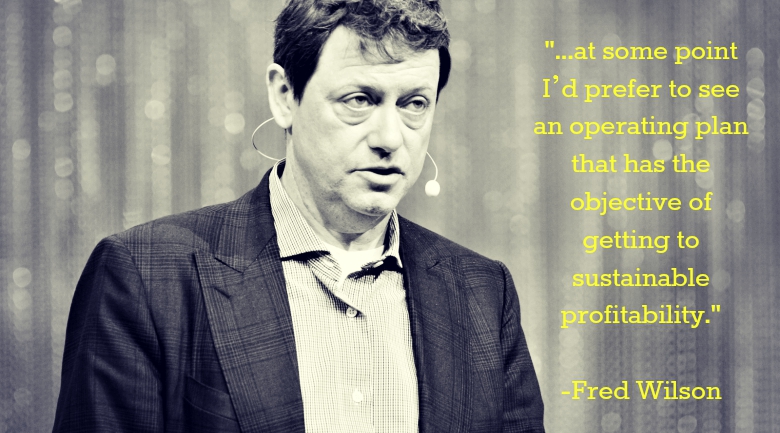 Heads up, startups! Highly influential venture capitalist Fred Wilson has some advice for you. Wilson is one of the founders of Union Square Ventures, a venture capital firm whose investments have helped make such sites as Twitter, Tumblr, and Kickstarter into the successes they are today. If you are currently seeking investors, it would be wise to take note from Wilson’s expertise.

In a nutshell: Wilson wants to see more startups focusing on long term profitability, rather than quick-and-dirty growth.

Read also: Big data is useful, scary, and more subjective than most realize

According to Wilson, it has become more or less standard practice for startups, especially tech startups, to begin by investing significantly in sales and marketing, even if it means they’ll lose money initially. The idea is to snatch up a piece of the market early on, with the intention of focusing on generating profit afterwards.

A growth period is crucial, but…

Of course, Wilson understands that a growth period is part of any startup, and is more than used to seeing a lot of the companies start out in the red before turning a profit.

But Wilson is wary of this growth first, profit later strategy.

He’s tired of seeing companies “invest in growth for growth sake without having any constraints or sanity checks on that investment and the losses that result.” That’s because when companies have capital (often generated from venture capitalist investments) to burn, they can “avoid making hard decisions” that would fine tune their product or ensure a competent, creative management team.

In contrast, Wilson prefers to invest in companies who plan to generate profit first and foremost, then later invest those profits into growth year after year. This tends to work well for startups that aren’t simply reinventing the wheel, but whose products have a genuine competitive edge in the marketplace.

Wilson argues that this strategy also makes the company stronger and more likely to last. Prioritizing profit has a lot of advantages: it makes the management team “think creatively and logically,” “roots out bad investments” and “helps maintain a lean and mean highly functioning organization.”

In a nutshell, Wilson is looking to invest in sustainability – and that means that if your idea is profitable from the start, it is more likely to grow year after year.

In this article:startups, Venture Capital