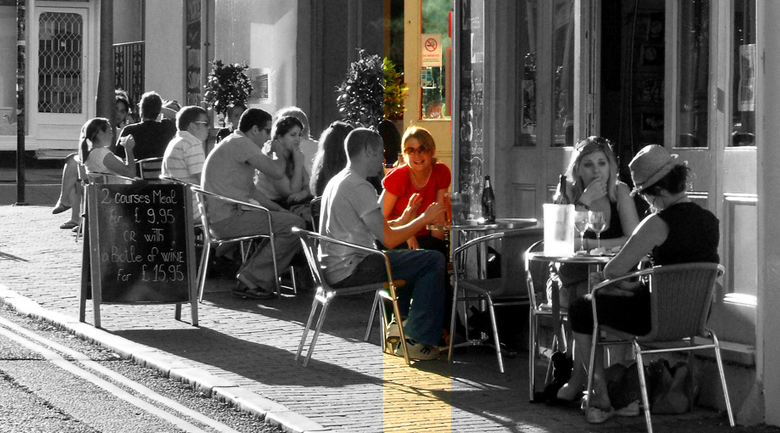 Announced in 2012, the Google Glass device will soon bring augmented reality to peoples’ glasses. Currently in public testing, the device is coming to a store near you. What is fascinating about the new technology is that it is wide open for third party developers to try their hand at innovating. InSight is an app developed by Duke University1 to recognize humans without facial recognition.

“We believe that it may not always be possible to see a person’s face. Our technique is complementary to face recognition, and exploits the intuition that colors of clothes, decorations, and even human motion patterns, can together make up a “fingerprint.” When leveraged systematically, it may be feasible to recognize individuals with reasonable consistency.” the paper reports on their attempts with early results from a prototype built on Android Galaxy phones and PivotHead’s camera-enabled glasses, calling the system InSight.

“In general, we intend to extend augmented reality to humans and the key challenge pertains to differentiating individuals,” outside of facial recognition.

Related: Google patent seeks to use your skull as a speaker

How InSight for Google Glass works

So you have a meeting with a potential client at a coffee shop, but they’re not answering their phone, and you’re not exactly sure what they look like or what they’re wearing. You’re wandering around aimlessly, about to start approaching strangers, or raising your voice. In the future, this scenario could be over, because the InSight app allows people to snap a shot of what they’re wearing, and the app will scan it for recognizable colors and patterns.

Then, based on that picture your client sent, the app in your glasses will scan the crowd and point out when it has found a match, even if from the back of the person.

The Google Glass app could be helpful, not only in social situations, but we could see law enforcement using it to spot a suspect or lost child in a crowd, or airports could use the app for additional security. Daily users will likely focus on using the app to locate potential contacts in a crowd, be it a coffee shop, or conference hall.

In this article:google glass, insight, Technology