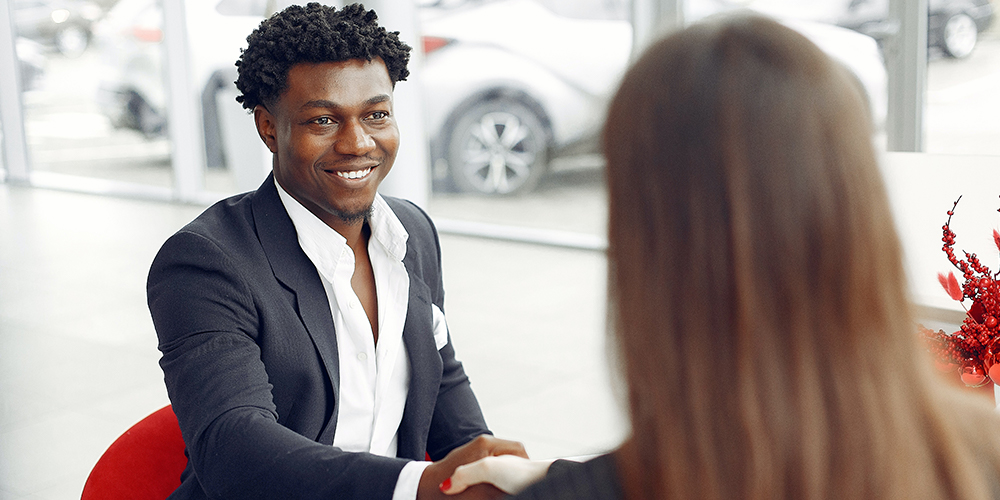 When it comes to how sellers and real estate professionals and agents are working together these days, surveys say things are going pretty well.

For its updated relationship check in, the National Association of Realtors asked recent home sellers who closed from July, 2019, through June, 2020, about how their sales process went.

Here are some of the main takeaways from NAR’s “2020 Profile of Home Buyers and Sellers.”

It’s still all about referrals and personal networks.

Asking friends, family, or relatives to recommend an agent – or knowing their agent personally – is by far the most common way sellers find someone to work with. Furthermore, 67% of all sellers either got a recommendation for, had a personal relationship with, or had previously worked with the agent. Referrals and relationships were the most common for first-time sellers, at 46%; for repeat sellers, 28% chose based on past experience. 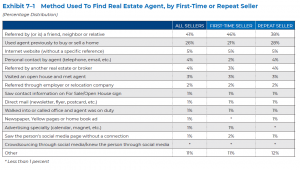 Sellers aren’t shopping around much.

Perhaps related to the high number of people who were referred to or knew their agent, 77% of recent sellers talked to just one agent before making a decision; 13% contacted two.

Most sellers who stayed nearby used the same agent to buy their next home.

MLS is even bigger in marketing, but yard signs are still popping up.

When it came to marketing, 91% of sellers said their homes were listed on the Multiple Listing Service (MLS), an increase from 2019, NAR notes. Only 2% of sellers surveyed stayed off MLS.

Among sellers who worked with an agent, 88% reported being on MLS. Agents also posted yard signs (68%) and held an open house (53%). Online listings on realtor.com, the agent’s own website, and third-party aggregators were used about half the time. Only 22% of agents posted listings on social media.

When it comes to marketing, however, the 2020 report also shows changing trends in strategies spurred by the onset of the COVID-19 epidemic. In the period from April through June, 2020, the use of open houses fell by 12 percentage points, while virtual tours and videos climbed by 16 points. Buyers are now doing more research on their own and touring fewer properties. 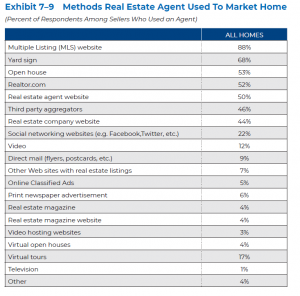 Agents are providing more services than ever before.

NAR also looked at how much sellers asked their agents to do, from selling the house within a certain timeframe to pricing, negotiation, marketing, help with paperwork, and more.

Only 6% of sellers said they had asked agents to provide a limited list of services. The same percentage applied to sellers who said they just wanted the agent to list on MLS and little else. 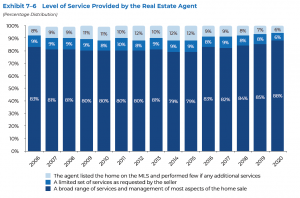 The top services all sellers wanted was help selling their home within a specific timeframe (22%) and help pricing the home competitively (21%). However, how sellers ranked services differed depending on how much they had asked agents to do. The previous percentages were reversed for sellers whose agents provided a range of services and managed the sales process. For sellers who asked agents to provide limited services on request, the most important service was help finding a buyer. For those who just wanted the agent to list on MLS, sellers most wanted help with marketing. 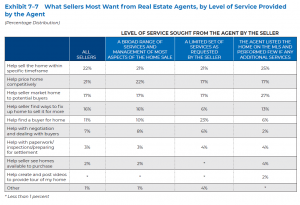 A good reputation and integrity get clients. 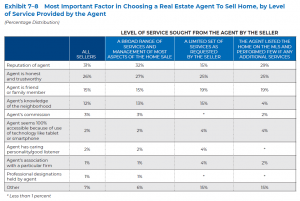 It falls mostly to the agent to get that conversation started. For 41% of sellers, they said their agent brought it up, but 23% of sellers said they had brought it up and were able to negotiate the commission or fee. Not everyone asked, though. When it came to 28% of sellers, they either knew compensation was negotiable but didn’t ask or didn’t even know that was possible. Only 5% of agents were not willing or able to negotiate.

While every agent wants a 100% satisfaction rating from clients, the 89% of sellers who said they would “definitely” or “probably” return to or recommend their agent isn’t too shabby. Satisfaction with agents was highest for those who helped sellers buy homes within 20 or fewer miles.

For many agents, that satisfaction turned into referrals. Although 33% of sellers reported no referrals, 41% had recommended their agent from one to three times, while an enthusiastic 27% had done so four or more times. The median number of times sellers made recommendations was two.

2020 NAR Report: Breaking down For Sale by Owner (FSBO) homes

NAR Report: Trends for home sellers and of homes sold in 2020