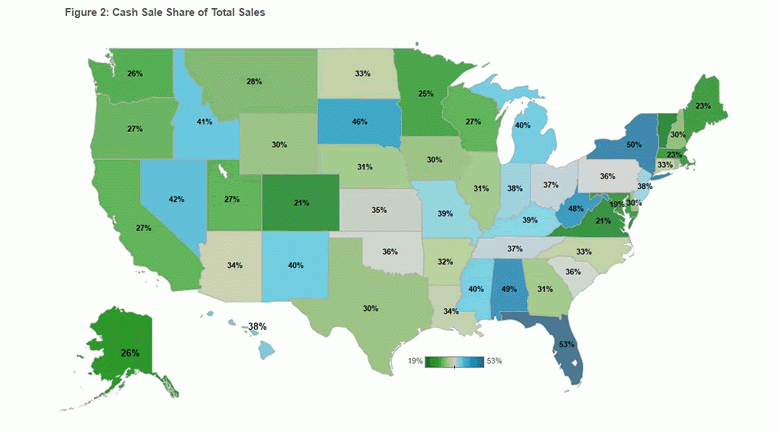 Before the housing crash, cash sales averaged 25 percent of all home sales, peaking in January 2011 at 46.2 percent.

CoreLogic reveals that REO sales accounted for most (55.5 percent) cash sales, followed by resales (34 percent), short sales (32.8 percent), and new construction (16.8 percent). At the peak of cash sales, REO transactions made up 24 percent of total sales, but currently only account for 8.2 percent; while the share has shifted, cash sales for REOs remain strong.

The most popular state for all cash sales is Florida, with the largest share of any state at 53.4 percent, followed closely by New York (50.3 percent), Alabama (48.9 percent), West Virginia (48.3 percent) and South Dakota (46.3 percent).

How you can appeal to cash buyers

Although cash sales are down, they’re still high above the pre-crash norms, so how can you as a real estate professional get in on cash sales?

First, we will address who you should be marketing to, and second, we will dive into whether you should even encourage cash sales for clients. To answer both of these questions, we tapped the wisdom of real estate investment broker, Jeff Brown at Brown & Brown Investment Properties.

Brown notes that in attracting cash buyers, two main groups come to mind: Americans and foreign buyers. He explains, “The foreigners, generally speaking, prefer paying cash for their American real estate. Americans generally don’t have all that much cash. I’d definitely market to Asians, Indians, Canadians, and Mexicans. Clearly marketing to all cash American buyers should be aimed directly at Boomers. There are 10k of them turning 65 every time the sun comes up anew.”

That said, is paying cash even a smart move in the current economic climate? Brown opines, “It’s not completely stupid to pay cash for long term investments, if indeed investments are what you’re talking about. Even then, it’s rare for me to advise that strategy. It’s usually due to their age (over 50ish) or circumstances. The only positive is more income now, which is what the older investor wants. The fact they could acquire 3-4 times that amount of real estate is irrelevant to them cuz they simply don’t have the time to eliminate the debt. ”

Brown states that when someone wants to buy a residence with cash, “all bets are off,” as it is a subjective decision. he adds, “Still, if they don’t have a cool retirement already locked up, paying cash for their home might not be the best approach.”

Housing is improving, yet is now the economy’s biggest drag