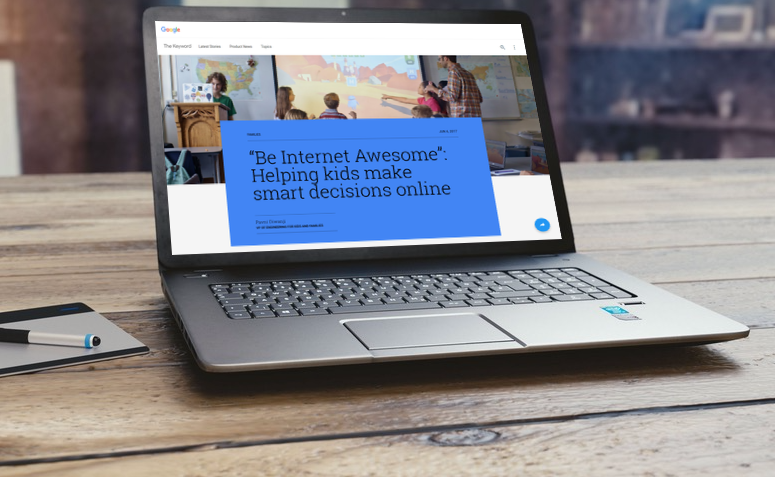 By the time the Internet became a “thing” I was already a teenager. In elementary school, we had a few computers with games that taught you typing and vocabulary, but they weren’t connected to the Internet.

It’s almost impossible for me to imagine the degree to which computer technology and the Internet have been integrated into children’s lives.

With toddlers messing with their parents iPhones, computers in classrooms, and Wifi-enabled devices at home, keeping kids safe on the Internet is major.

Google is reaching out and creating some interesting collaborative partnerships in hopes of educating kids – and their parents – about Internet safety.

Google has its own kid-friendly department called Engineering for Kids and Families.

The team has recently revealed, via Google’s blog, that they have launched a campaign called Be Internet Awesome.

And by being internet awesome, they mean “Helping kids make smart decision online.”

Working with teachers and the Internet Keep Safe Coalition, the team developed a Be Internet Awesome curriculum for classrooms.

The curriculum includes games and interactive activities to get kids practicing their skills.

For example, in a game designed to increase Internet alertness, kids learn to identify signs of phishing.

The curriculum got a seal of approval from the International Society for Technology and Education (ISTE). Carolyn Sykora, Director of Standards at ISTE says that “Building these skills in our students will require ongoing attention as new technologies post challenges and opportunities for students both at home and at school.”

“Be Internet Awesome provides materials educators and parents can use to help student learn about online safety in a fun and engaging way.”

Besides providing educational materials to teachers and students, Google also wants to help parents talk to their kids about Internet safety. They’ve teamed up with YouTube star John Green of MinutePhysics to create a Be Internet Awesome video series that kids and parents can watch together.

Google is putting their best foot forward here. With the uphill battle of internet safety, it is nice to know that one of the biggest companies in the game has your back.

If you have kids, consider tapping these resources to help them to Be Internet Awesome.

In this article:be awesome, google, Internet safety, The News