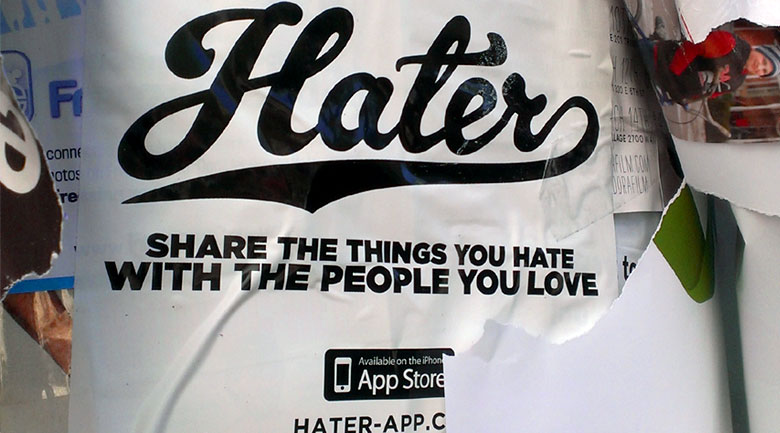 Walking down the halls of SXSWi or outside of the massive Convention Center this week, attendees can’t miss the giant thumbs down poster with the word “Hater” and tagline, “share the things you hate with the one you love,” which in the era of boredom with mobile apps and the tech world proclaiming in advance that there would be no breakout app, the Hater App has captured the attention of the town.

They explain that they’ve added a massive “DISLIKE” button to a world restricted to Likes. “Who says your only option is to like? Who really “likes” your ex’s new significant other, friends who are always on vacation, and especially what they are eating! No thanks, now you can Hate on it.”

Why is this the breakout app?

The company says the iPhone app will soon launch on Android, and is being called on the showroom floor an “Instagram for haters.” But why is this novel app that launched just prior to southby the breakout app in a supposedly breakout-free era?

As social media has lost its luster and even MeeMaw is on Facebook, so early adopters who were already prone to critical thinking, thus cynicism are also prone to some hater-type talk. Duck faces on selfies? Hate. Twitter “gurus” claiming their ability to sign you up for Twitter is innovative? Hate. Tech news outlets that post about Kim Kardashian? Hate.

But what about the “dislike button” browser extension or other fun “dislike” tools? Why haven’t they been a breakout success? Because they weren’t launched as a community, and while it is primarily novel, it should be watched by businesses (to make sure they are fixing whatever is being hated on), and used for those that are suffering from social media fatigue.

Related: The jet lag of socially connecting with strangers

Let’s face it, bitching online is fun. We all do it, so one of the advantages we see of the Hater app is keeping all of the hate into one hater-filled community, so if you look at it through rose colored glasses, rallying the haters is kind of cleaning up Facebook and Twitter, right? Maybe.

Features of the Hater app 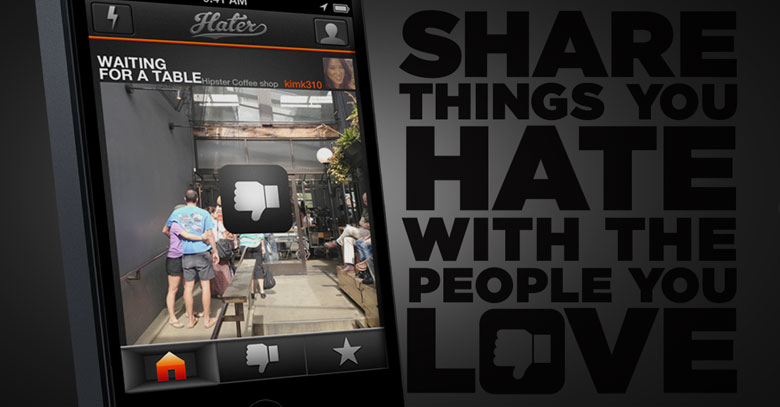