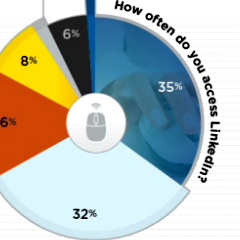 When many people signed in to LinkedIn for the first time, they were in college or had been prompted by a coworker to sign up, knowing little about the network other than it appeared to be a virtual resume. The culture was professional over social from day one, but with the integration of third party apps and status updates within LinkedIn, the culture has shifted.

The emphasis remains, however, to be a professional watercooler. Most users don’t update about the flavor of ice cream they’re eating whereas on Twitter they do.

Conversations on LinkedIn sound more like conversations you have while waiting for other people to join your conference call – small talk and casual but still professional.

But how has the small culture shift changed user behavior on LinkedIn? Are real estate professionals using their time wisely on the professional yet social network?

Lab42.com surveyed 500 Americans who were registered LinkedIn users and analyzed how they used their profiles and discovered the following. We would emphasize the first chart of use frequency as one of the most important for Realtors who are seeking to utilize LinkedIn to its fullest capacity:

LinkedIn is not a network people check into every day like Facebook, but it is most highly valued for its professionalism. So your tone and frequency should reflect the culture rather than violate it. Talking about parties should be kept off of the site, and posting ten updates per day will contradict other users’ behavior and stand out.

The good news for those of you overwhelmed by social networking or your marketing plan in general is that although it is wise to have a complete profile on LinkedIn and to be actively updating your status and using the available apps, in order to use the site to your full advantage, you do not need to dedicate nearly as much time to it as other social networks.