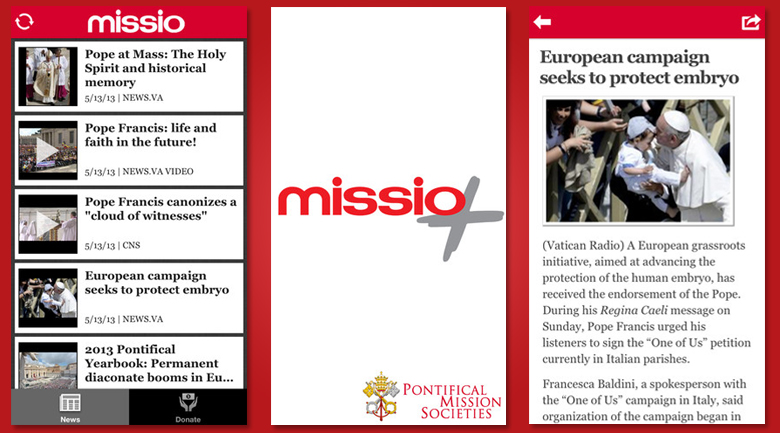 Marking its official launch, Pope Francis has clicked open the Missio app on an iPad, developed by Father Small, National Director of the Pontifical Mission Societies in the United States and his team to offer news from the Vatican website and Pontifical Mission Societies, photos, streaming and replay videos, and the Pope’s homilies to Catholics and non-Catholics alike.

Available in English, Spanish, Italian, German, French, Portuguese, Chinese, and Arabic, the app is compatible with iPhone, iPod, iPad, and Android devices which Father Small says seeks to help people see the world through the eyes of faith.

Read also: Pope Benedict urges social media users to listen to each other

Most social media gurus will tell you not to talk about religion on social networks, but what is a religious organization to do in an effort to become modern as demanded by a rapidly innovating world filled with people relying on whatever devices their eyes are locked in on at the time, be it smartphone or tablet.

Missio is primarily focused on news, and while there are many apps already available that pertain to religious news, observing the Vatican remain relevant when it comes to technology is a fascinating study, particularly in light of so many businesses still struggling with the decision of getting online, much less launching an app.

In 2009, we took a marketing publication to task for asserting that The Pope was essentially ignorant to social networks, which could not be further from the truth.

The Vatican has always embraced technology, dating back to pamphlet distribution at early onset of print publication, to the Vatican Radio station launch in 1931 all the way to modern web technologies. The Pope publicly said in 2006 that technology should be embraced to “spread the good news” and has had live broadcasts of his addresses for years. Since launching the Vatican YouTube channel in January of 2009, over 1,300 videos have been uploaded and Pope Benedict encourages others to use social media to network around common human interests, to support others and to do good works through social networking.

In January 2009, Pope Benedict said, “I am conscious of those who constitute the so-called digital generation and I would like to share with them, in particular, some ideas concerning the extraordinary potential of the new technologies, if they are used to promote human understanding and solidarity. These technologies are truly a gift to humanity and we must endeavour to ensure that the benefits they offer are put at the service of all human individuals and communities, especially those who are most disadvantaged and vulnerable.”

It remains to be seen what Pope Francis’ long term message regarding technology and social media as a communication device will be, but his inaugurating the Missio app is a supportive step toward engaging Catholics and non-Catholics alike.

In this article:missio, Social Media, Vatican