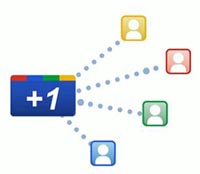 Google +1 all over the place

The Google +1 button has now gone public and not only can users “+1” (said “plus one”) directly in Google search results, but website owners can add the button to their home page or website posts. It’s similar to the Facebook “like” button and is a vote in Google for specific content which could alter the way you see search results in Google.

Here are six things you should know about the Google +1 button:

As mentioned previously, the Google +1 button is now available through the Google Webmasters site. If you are not tech savvy, ask your web developer about getting your +1 button.

But it sure does change it. We covered that more in depth here. Some people that are not well educated on the topic are crying foul, but Google has simply added a layer to their algorithm, not replaced it. SEO is rapidly changing though, so your web efforts should be minded as this shift takes place.

3. Consumers will expect the button

If you have a blog, the +1 button will eventually become expected by consumers, just like they’ve come to expect a Facebook share or like button. Consumers want to share your site in the way most comfortable to them, so why impede them?

4. +1 votes and your Google Profile

This year, Google Profiles underwent a facelift and now, in addition to your “about” and “buzz” tabs, you’ll now see a +1 tab that will show all of your +1 votes, so be careful how you endorse, the same way you do with Facebook sharing (in other words, to be graphic, you should probably avoid hitting the +1 button on a p*rn site as it’s not private and is linked with your Google Profile). We already foresee some embarrassing situations will unfold in the near future.

5. Sneaky hack others don’t know about

While we can’t promise this Google Chrome extension will be around forever and there are rumors it has Google Analytics in its code (meaning it is tracking your use of it), it is a risk to install, but you can currently use this extremely unofficial tool to see how many +1 votes any website (hint: yours) has and to “+1” a site even if it doesn’t have a button. It is a simple free extension in the Google Webstore and if it remains, it should be checked into on your site from time to time as yet another metric.

We suspect Google will eventually link the +1 into their analytics suite, but it’s not there yet (and we don’t prefer Google’s Analytics anyhow).

6. Is Google Buzz going the way of the dodo?

Google is patient and is poised to strengthen the backbone to social networking rather than build their own copycat. Google Buzz isn’t dead, but we believe it will be folded into Google Profiles the way Google Wave was unofficially folded into Google Docs by killing Wave and adding interactive features to Docs. So don’t go deleting your Buzz button from your blog quite yet.

In this article:google +1, google plus one, News, real estate technology