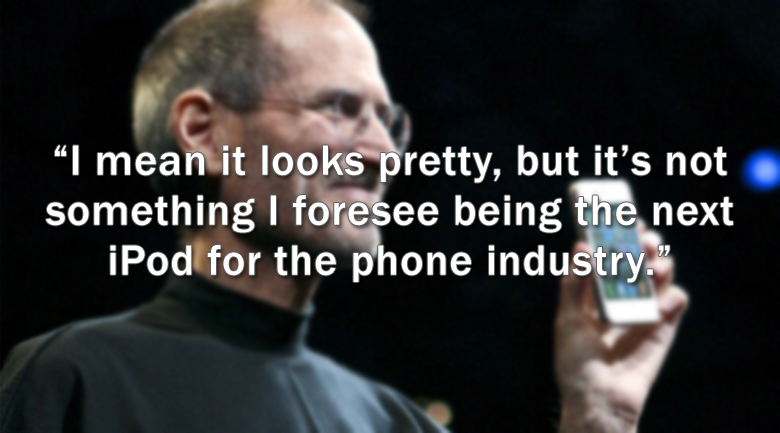 The original reactions to the iPhone weren’t all positive

Here is some trivia for you. What event that reinvented technology, communication, and media happened on January 9th, 2007? (Sings Jeopardy Theme)…

Answer: It was the date that the late Steve Jobs announced the launch of the iPhone. You would think that jaws would be dropping everywhere from such an innovation in design. However, this was not the case. The online community took to the iPhone like a cat does to a new house pet. Not on my watch!

Read also: Steve Jobs – did the wrong guy at apple get all of the credit?

Just like with any new genius idea that is light years ahead of its time the launch did not go well. There was much skepticism and doubt that this weird 11.6 mm device with a 3.5 inch 480 x 320 touchscreen display would ever replace the beloved industry standard cell with a proper keypad; but look what happened to Blackberry.

The tone today is far different than the criticism of 2007

So here is a lovely tribute to public sentiment; some of the comments from the launch of the iPhone:

“Apparently none of you guys realize how bad of an idea a touch-screen is on a phone. I foresee some pretty obvious and pretty major problems here.”

“I’ve got touch screen buttons on my Samsung i730 and it sucks.”

“I’m not impressed with the iPhone. As a PDA user and a Windows Mobile user, this thing has nothing on my phone.”

“lol last I checked many companies tried the tap to type and tap to dial … IT DOESNT WORK STEVIE, people don’t like non-tactile typing, it’s a simple fact, this isn’t a phone it’s a mac pda wow yippee…. “

That last one was a personal favorite of mine. You should have seen how many typo’s and spelling errors I had to correct. Jeesh!

This dude was kind of a prophet: “I see scratched and cracked screens aplenty.” Lolololol. That guy could have been rich had he realized the new market that was just introduced.

So these are just some of the crazy lol comments that came at the launch of genius. If you would like to see all of them; the good and the bad, check out the vintage Endgadget article. It’s literally like a digital time capsule. Too bad we don’t have the comments about DC vs AC electricity, the compact disk; or the proportional font debate.

Disruptive technology is just what the name applies, and good tech will always cause a stir as long as we have free thought. Don’t you just love opinions?

I would like to give credit to the Reddit user: /u/intensely for posting the web-archive link that featured the original Engadget article that was attached to the keynote speech.

In this article:iPhone, steve jobs

(TECH NEWS) New iPhone app helps find your iPhone so you can find your phone to phone a friend. Are you ready to play...