For less than half an hour today, Facebook users panicked, mocked, and critiqued a new “hate speech” report feature that asked “Is this hate speech?” on every single post.

Selecting “no” makes the prompt go away on a single post, and opting for “yes” led to a pop up that asked users to clarify what type of hate speech it was, but the questions were incomplete, making it clear it was a feature they’re working on that was accidentally made live to all users. 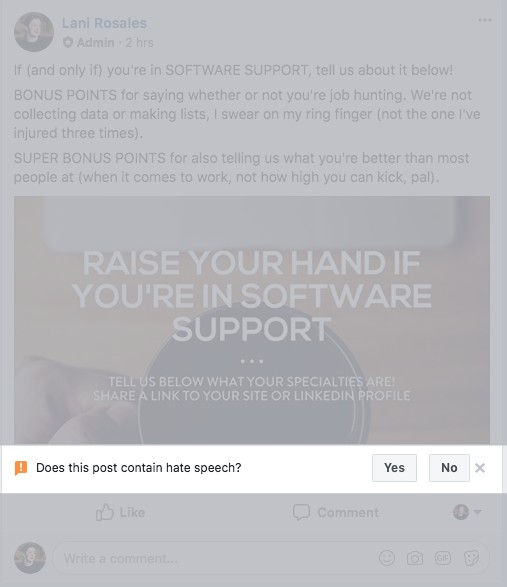 Facebook has since confirmed the mistake, saying it was, in fact, supposed to be an internal test and called it a “bug.” It is possible it will be rolled out in some form this week as the F8 developer conference is under way.

Most people are reacting today by sharing silly posts and memes that are clearly not hate, and challenging even being asked.

But what people are not saying is that not only is this annoying (to be asked on every single post so Facebook can have even more data points on your personal opinions), but that it is a threat to free speech.

Facebook already has a report function, and has finally pledged to offer an appeals process after endless peoples’ accounts have been censored and shut down without warning. Why, then would they need an un-triggered feature such as this?

Imagine you post a link to a fundraiser to a local Democrat running for City Council. A Republican feels bullied by it and reports it as hate speech. Theoretically, the post is hidden until a human at Facebook can review it manually, just as reported posts. That’s a pretty easy way to silence people that disagree with you.

So why get bent out of shape by this feature when we already have reporting options? The current reporting options are not top of mind, they are more than one click away, and there is no subtle indication that someone’s post could be violating my personal feelings in the form of hate speech.

The point of contention I offer is not that Facebook is collecting more data, that’s actually a great way to train their AI tools to intervene when hate speech is present. Rather, I believe putting a bold, unavoidable notification on every single status update makes a statement that your primary function as a Facebook user is to police, which we all know means flag someone you disagree with and silence them, even if temporarily.

Facebook is doing everything incorrectly, especially as they try to control behavior and act as the arbiters of morality. It’s a joke – if you’ve been to a town hall debate, you know it gets rowdy. Social communities were originally created so we can listen to each other, not to task us all with policing the web. During Zuckerberg’s testimony, it was striking that he is willing for Facebook to be used as a political weapon in nations across the world.

If this is Zuckerberg’s vision for Facebook, investors will be forced to reconsider what they’ve invested in – a social technology, or a political weapon. And those displeased with that vision should sell.

The ultimate outcome of putting this “feature” front and center will be for users to flag political speech as hate speech, and as behavior changes for the worst, it could ultimately create echo chambers that resemble infinity mirrors. And Facebook will fail.