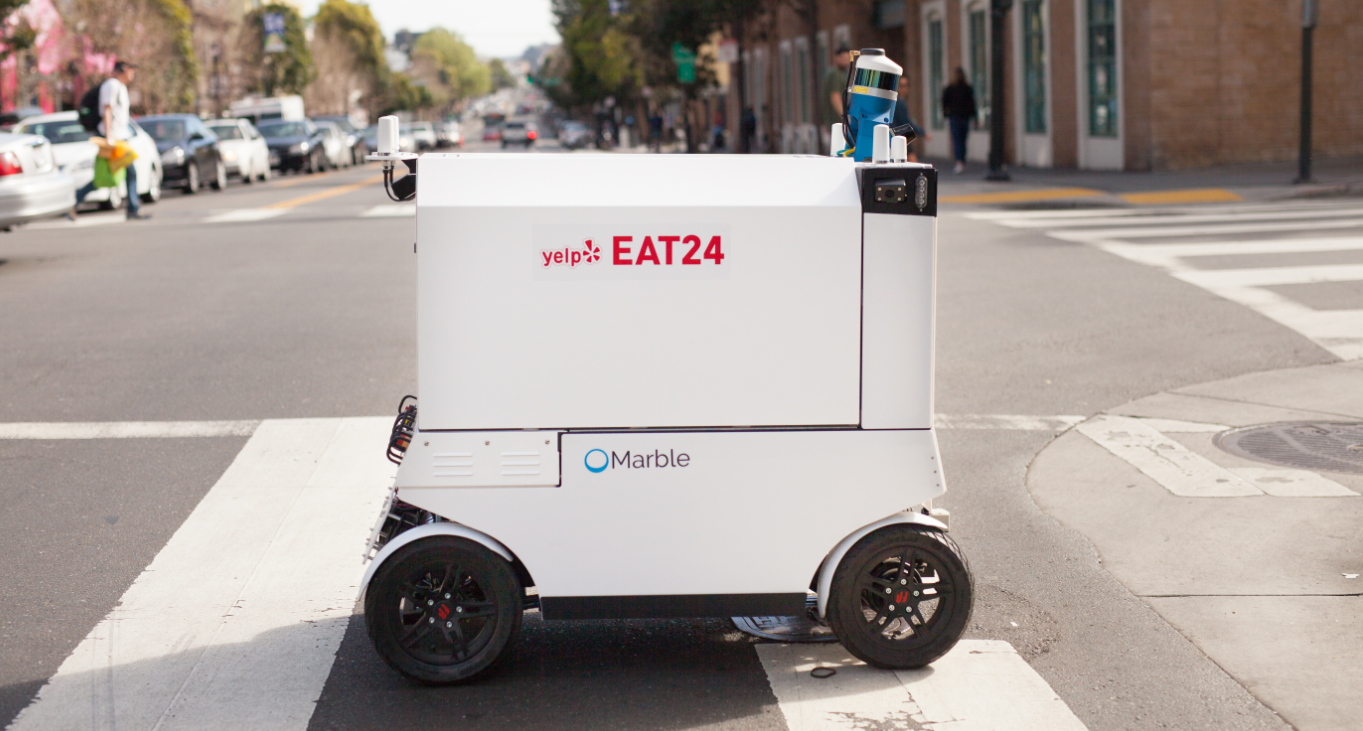 San Francisco residents who order takeout food delivery may soon have a robot delivering them, thanks to the partnership between Yelp24 and the small robotics startup Marble, founded in 2015.

Read also: Great, now robots are beating us in physical poker games (even when we cheat)

Yelp acquired Eat24 back in 2014 for $134 million, with an explicit goal of expanding beyond business listing services. Now, three years later, their dream is finally taking shape on an experimental basis.

Starting April 12, residents of Mission and Potrero Hill neighborhoods who order takeout on Yelp’s Eat24 food delivery service will have an option to have a Marble food robot shuttle their food. To make sure customers are not utterly confused, they will receive a text message explaining the new test delivery program, and asking their permission to participate.

If they text back with a ‘yes’, a robot shall be sent for delivery.

On arrival, customers receive their food on the sidewalk (the robots cannot climb stairs, mind you!) Customers are sent a password on their phones ahead of time. This password gives access to the robot’s compartment containing food.

The food is kept warm by Yelp24 heatbags.

However, that may soon change as developers at Marble plan to equip the food robot with temperature control, acting as either refrigerators or ovens.

The Marble robot, a miniature dryer lookalike, is essentially a white, moving box, with four wheels clearly visible. It shuttles food between the Marble HQ, restaurants and customer homes. Only five restaurants have signed up for the food robot delivery program.

So far, the distances travelled has also been small, typically within a mile.

Even so, for now a human will accompany the Marble robot to ensure smooth operation and perhaps prevent vandalism.

Marble has not disclosed the cost of the robots, but it is likely very expensive, given that it is a prototype that took a long time to develop, and a first of its kind. The economic viability of a ground-based autonomous is not clear at all.

CEO of Marble, Matthew Delaney claims that the goal of the company is to create a fleet of robots and partner with companies for delivery, from which it will receive a recurring fee. “We’re initially starting with the meal delivery, we’re also looking at other markets like grocery, and pharmacy,” he said.

But Marble has raised only $ 4 million in seed funding round last April, led by Eclipse, and partnered with Maven Ventures, Amplify Partners and Lemons Labs. Its revenue, if any, is not known.

Marble is sure to face competition from other robot delivery makers like Flirtey, Starship Technologies, and Dispatch.ai.

For now, however, UberEATS and Favor has advantage over these pioneering technologies.
But that is not holding Marble back. A world in which robots deliver anything and everything would save time, money and free people to more worthy things. “This is the biggest opportunity for robotics in front of humanity right now,” Delaney said.

Bot builder applies to thousands of jobs at once, shares lessons with job seekers

(TECHNOLOGY) Microsoft will not be left behind in the Metaverse. The tech giant plans to fully acquire Activision Blizzard by 2023 for $68.7 billion cash.