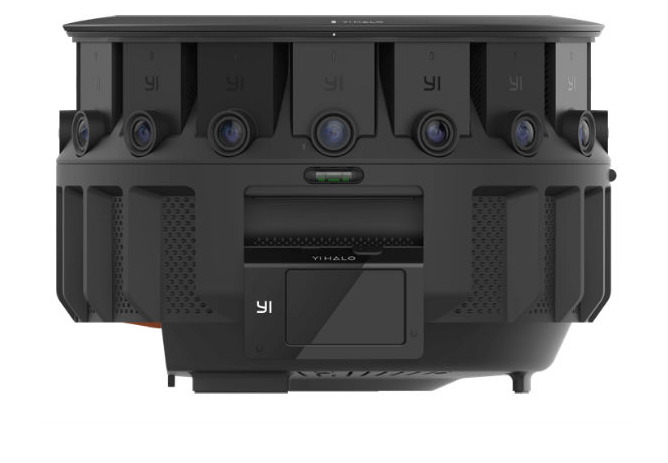 Real talk: how long have you been waiting for a holodeck?

Not 3D TV, coolest news of 2010, fastest punchline of 2017. Not even virtual reality as it stands, because as it stands VR is teetering between genuine next-level tech and a gimmick of the gaming industry.

Read also: Now you can get new VR adventures sent to you monthly

No, I mean the holodeck. Artificial reality. Total immersion. Fact and fiction you can sink into and control from inside.

Well, bad news: I haven’t invented a holodeck. I don’t invent things. I was an English major. I’m lucky I can dress myself.

The people behind the Yi Halo haven’t invented the holodeck either, sad to say.

But they may have made the means to build one. Behold the Yi Halo, Google and Xiaomi’s epic new tool for VR creators.

OK, first, the elephant in the room: that thing looks like robot doom. Right? Look at it! I’m sure I had to murder that in a Metroid level once.

Sorry. Serious journalism mode: on. The Yi Halo is a genuinely big deal, a jump up from Jump, Google’s current stereoscopic video solution.

The raw numerals of the Halo are impressive enough.

There are 17 4K cameras. 5Ghz WiFi, so the operator can control the behemoth and even transfer and edit video from their smartphone. Battery life is supposed to allow for 100 straight minutes of 360-degree stereoscopic recording.

Let me tell you why that’s a good thing.

Every piece of tech has enthusiasts

Ever heard of chiptune? It’s a real thing! A whole genre of music based on, inspired by and, most importantly, technically limited to the incredibly constrained audio possibilities of old sound chips, the things that made the squeaks and thunks and crunches in old Commodores and NESes.

Google gets that, better than any big label since IBM started paying hackers to work for the good guys. Even with the aforementioned Jump VR, Google made a systematic effort to reach out to hackers and makers and early adopters, because they’re always the tip of the spear and the core of the customer base when it comes to cool new tech.

But they’re also the bottom of the range, and that’s not how you get a holodeck.

Who’s been doing that lately?

With the Yi Halo, Google is showing commitment to the top end as well as the bottom. Chromecast and Google Assistant have obvious consumer appeal even if true Artificial Reality never materializes. The Yi Halo doesn’t. It’s for this specifically, top-end, apex quality VR creation.
If you want a holodeck, you have to convince the people capable of making them that they’re worthwhile. That’s how you get VR that’s more than a toy. Google’s backing that play.