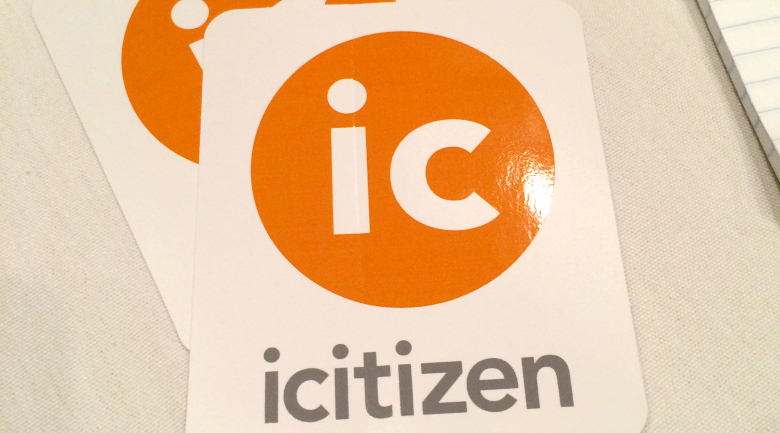 President Obama’s final State of the Union address has instigated a great deal of buzz throughout the country. As we say goodbye to his presidency and look toward the 45th, a recurring topic of conversation is how to get millennials involved in the voting process.

Now, to get us to do virtually anything, there has to be some sort of technological aspect involved. We millennials are, rightfully, stereotyped as to have our phones glued to our hands 24/7. So, it would only make sense that there is a potential for this generation to become involved if given a quick and savvy way to do so.

icitizen: “A hub for your civic life”

This is the mission of icitizen. Launched over two years ago, and rebranded and re-released less than a week ago, icitizen is working to bridge the gap between millennials and politics. With the slogan “A hub for your civic life”, icitizen works hard to provide politicians with information curated from the app.

The app was put to the test the night of the State of the Union, as representatives and members of icitizen came to Illinois State University in Normal, IL for a live-stream watch party.

Potential to make a change

While some students were incentivized by extra credit and free pizza, many students came for the opportunity to be civically engaged. Organizers and sponsors were astounded by the turnout, over 600 people, and we able to spread the word about the importance of being involved in politics and the community.

I had the pleasure of speaking with the members of icitizen following the address. Their mission is one of importance and their execution has the potential to make a change in how younger generations engage with politics.

TL: How did you come up with the idea?
Beth Huth [VP Marketing and Business Development]: icitizen has been around for about two and a half years. And it started from an idea from an entrepreneur in Nashville who thought about making the idea of communication between the citizen and politics an easier process.

TL: Are you local to the area (Chicago/Southern Illinois)?
BH: we’re headquartered in Nashville and our CEO, Russ Reeder, was originally based in California and he just recently relocated to headquarters in Nashville. He is also now a co-founder with a company in rebranding and re-visioning icitizen. And, just four days ago, we launched version two of our app.

So, we’re excited about this partnership because this is the first time that we have had polling as well a relationship with AASCU, and our 400 different universities put to the test.

TL: And how has that been going so far?
Alex Schreiner [Partnerships & Outreach Manager]: well, three or four days into it, I could not believe how many students that we got to come to this event. I don’t know that I’ve ever seen so many students gathered in one place for something political that’s not a rally or protest. This was a nonpartisan event, and we packed this house with students from Illinois State University, from Heartland Community College.

I was blown away by the attendance and the participation, and the buy-in that we got from the schools that were involved in it.

So, I think that for us this was really encouraging that there is so much enthusiasm about our vision for what these events can look like, and changing the way that we ask students to participate in politics. [Because] the old way just isn’t working anymore. 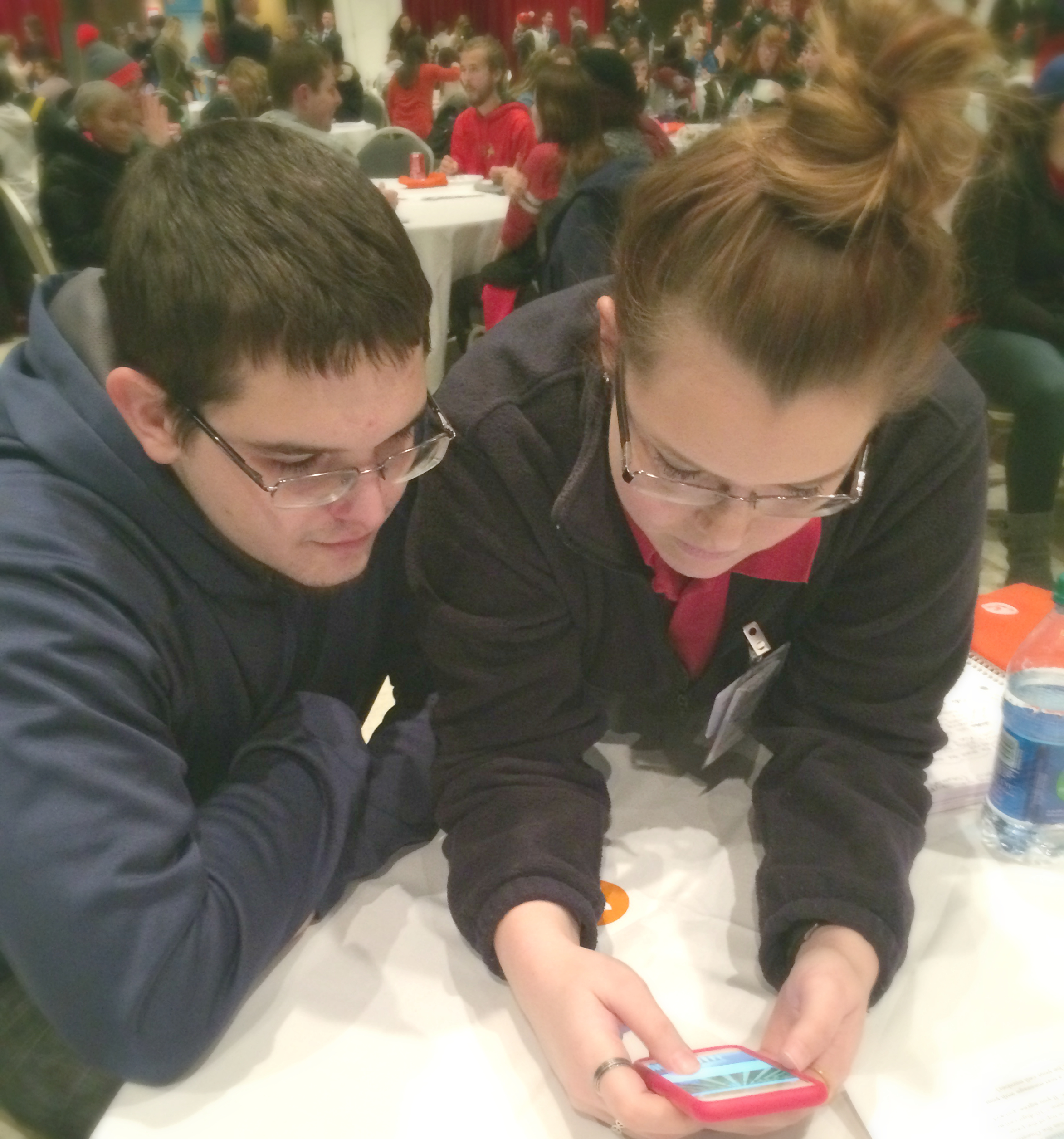 TL: Was that the big motivator for the rebrand and redesign? So that it could be targeted toward a younger audience?
BH: Absolutely.

You know, when I think about the future generations of our country, the people who are really going to make a difference, it’s the millennial generation.

In two years, over 36 percent of our voting population will be millennials.

So, when I think about voting, and I think about calling people to action to have a say in what is going on in policy and community, the old way, where you basically just find a voting place, is broken. Allowing millennials to engage with politics, such as any form of legislation or bills, or just issues that are driven in their world – having it on a mobile device is a huge motivation for us.

TL: Can you tell me a little about the role of polling in politics?
Mark Keida [Director of Polling]: The reason we include polling is because polling is a way that you can make your voice count. So, when you put a poll out there, and there’s no answer to it, we don’t know how you feel. When you think of the electors, and there are over 300 million in the country, we have 535 members of Congress, senators, and the House, plus our president. How do they know [what citizens are feeling]? Polling is one of the ways that we get the intelligence of what the people think. And so, we developed in our app a polling capability.

We did this for the event, we put out 30 different poll questions, and we will continue doing that all of the time as a part of our app, so that we can hear what people think. And then what we do is, with the issues that are most popular, share that data anonymously with elected officials. Alex mentioned that this world is real-time and ongoing, and everything is on the super-computer or smartphone. This is the way the world is moving. And, when you think of polling, it’s very old types of technology, but we’re putting it on an app so that this way you can do it in real-time.

Giving these elected officials a way of putting a finger on the pulse of seeing what people really think and what they really want, is democracy in action. It’s something that is done between elections.

So, it isn’t just voting every two years. The president talked about that tonight, you know, get involved between elections – don’t just vote during the election time. And, what icitizen is really trying to do, is help people: they’re passionate, they’re interested in getting involved, and they are on their phones all the time. So, we’re putting those two together and saying, “well how can we get people involved?” And the phone helps us do this. 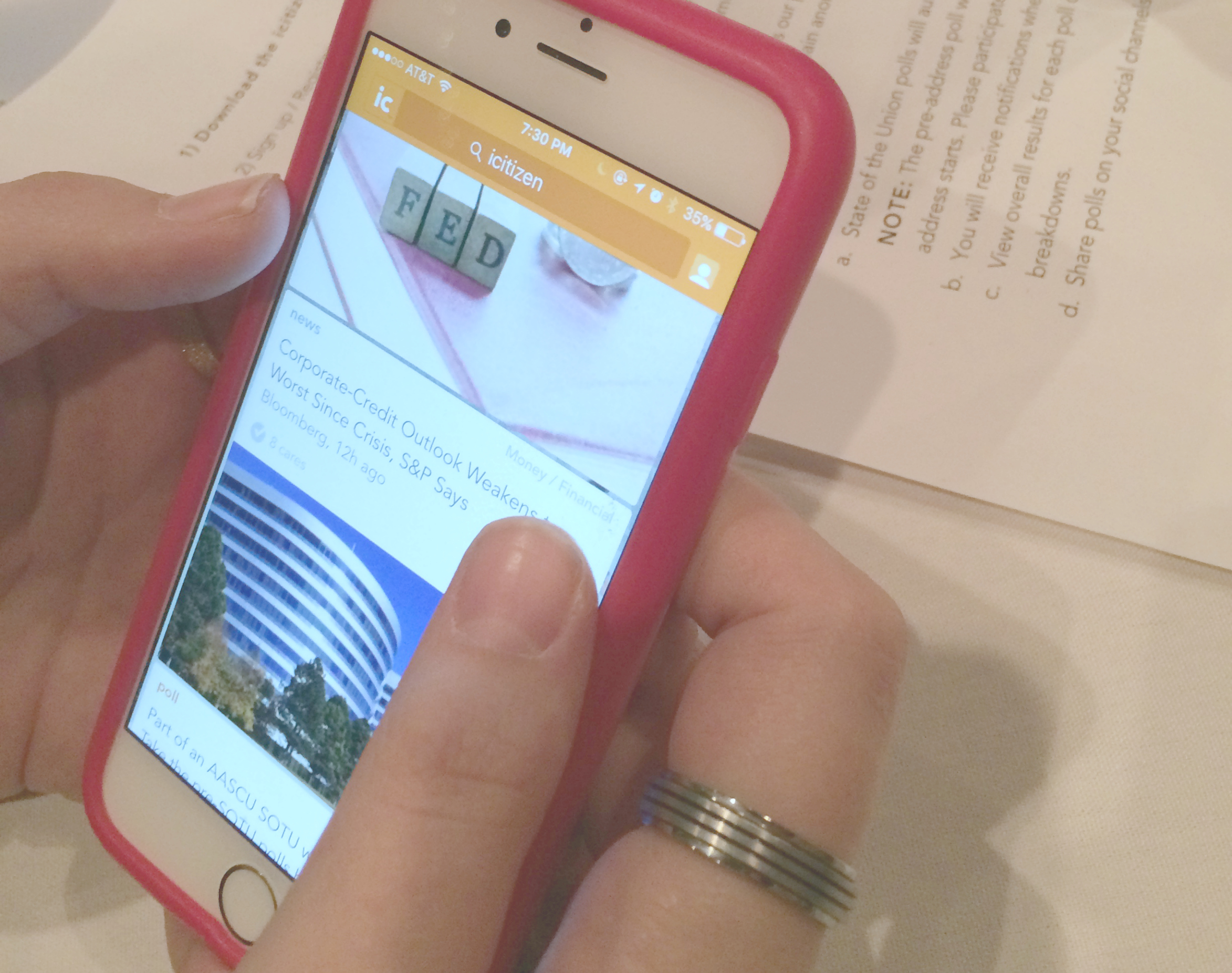 TL: How did you become involved with Illinois State?
AS: When I started working for icitizen, I was in D.C., and we were just starting the process of identifying really who were the most important markets for us to try and launch this to. And universities and schools are such an obvious choice. There’s been a tremendous need amongst these institutions for the type of information and data that we are able to provide and knowing what your students’ political sentiment is, and social sentiment of different issues.

So, we actually got an email from the American Association of State Colleges and Universities which said, “hey, somebody in our office just downloaded your app. Can we talk?” And then we found out that we were, basically, within a couple of miles from each other in D.C. So, I went into the office and sat down with members of AASCU, and, as we started talking, I think both sides realized at the same time that there is so much potential here for what this relationship can transform to in the next couple of years. We basically started talking about this event two years ago, and asked how we could make it a student-oriented State of the Union event.

Jen Domagal-Goldman [AASCU member] said, “you’ve got to meet these people from Illinois State. They are so motivated”. And she said, “if you want to do a live watch party and live-stream this across the country from the university – let’s have a giant gathering at one school and broadcast it to other schools that are interested. We think we have the perfect place, and it’s Illinois State”.

And, they were so right. They have connected us to Heartland Community College and the folks over there were incredible at working with us. And what we saw were ripple effects from one very small group of people at Illinois State University faculty, and it rippled across the entire school. I mean, they got everybody involved. We wound up having 600 people and we ran out of chairs. I never hoped, in my wildest dreams, that this would be the case in the first year that we’ve ever really tried anything on this scale. It’s amazing.