This week, Montana governor Steve Bullock signed an executive order to keep on rockin’ in the free internet world. The order states that any Internet Service Providers (ISPs) renewing or creating new contracts with the state must adhere to net neutrality.

Bullock’s order requires any ISPs with new or renewed contracts signed with the state on or after July 1, 2018 to play nice with their customers. Under the order, ISPs are forbidden from blocking sites or charging more for faster delivery. 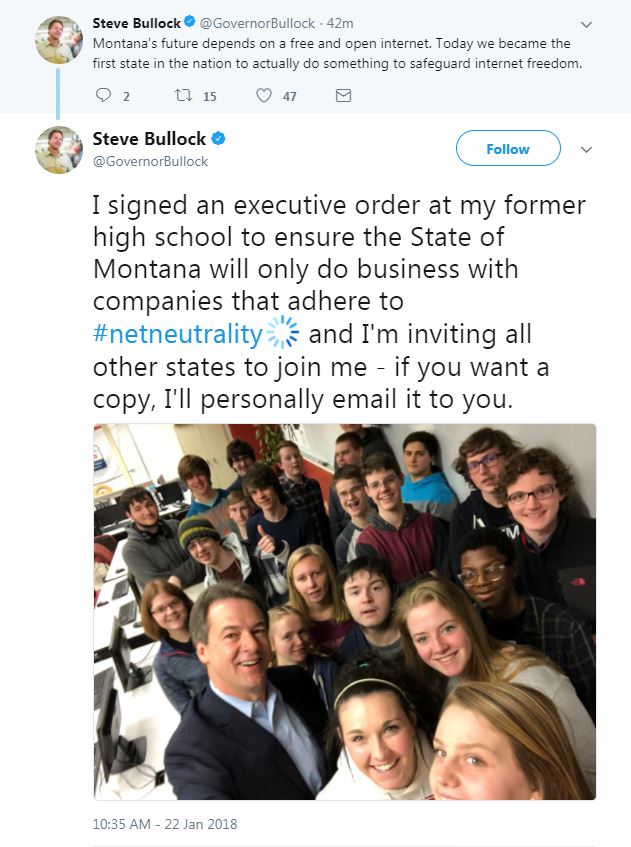 These are two primary components the FCC rolled back when they voted on the Restoring Internet Freedom Order, repealing net neutrality regulations. Without regulation, ISPs are given free rein to throttle internet speed, creating “fast-lanes” where users pay to receive quicker services.

ISPs would also have the power to promote their own interests by slowing down or even completely blocking sites from competitors. While the FCC argues this is in the spirit of free market competition, it’s likely to create even tighter, unregulated monopolies.

Major mobile broadband and landline providers like AT&T, Charter, CenturyLink, and Verizon currently hold government contracts in Montana. And oops, pretty much all of those companies were cheering on Ajit Pai in his crusade to kill net neutrality.

Since the FCC’s December 14 vote, a series of lawsuits have been filed by other states. New York Attorney General Eric Schneiderman spearheaded a multi-state lawsuit including attorney generals from 18 other states.

Just last weekm over twenty state attorneys and public interest groups filed lawsuits against the FCC, and the appeals keep rolling in.

This executive order is the first of its kind by a governor, and we applaud Bullock’s bold actions to protect net neutrality. However, he may have trouble implementing the order.

One catch? When the FCC decided to roll back protections, one of their stipulations was that no state could go rogue and create its own net neutrality rules.

Regardless, Bullock tweeted “Montana’s future depends on a free and open internet. Today we became the first state in the nation to actually do something to safeguard internet freedom.” On his Twitter, Bullock also provided a downloadable template inviting other states to follow suit.

In this article:net neutrality, Tech, The News