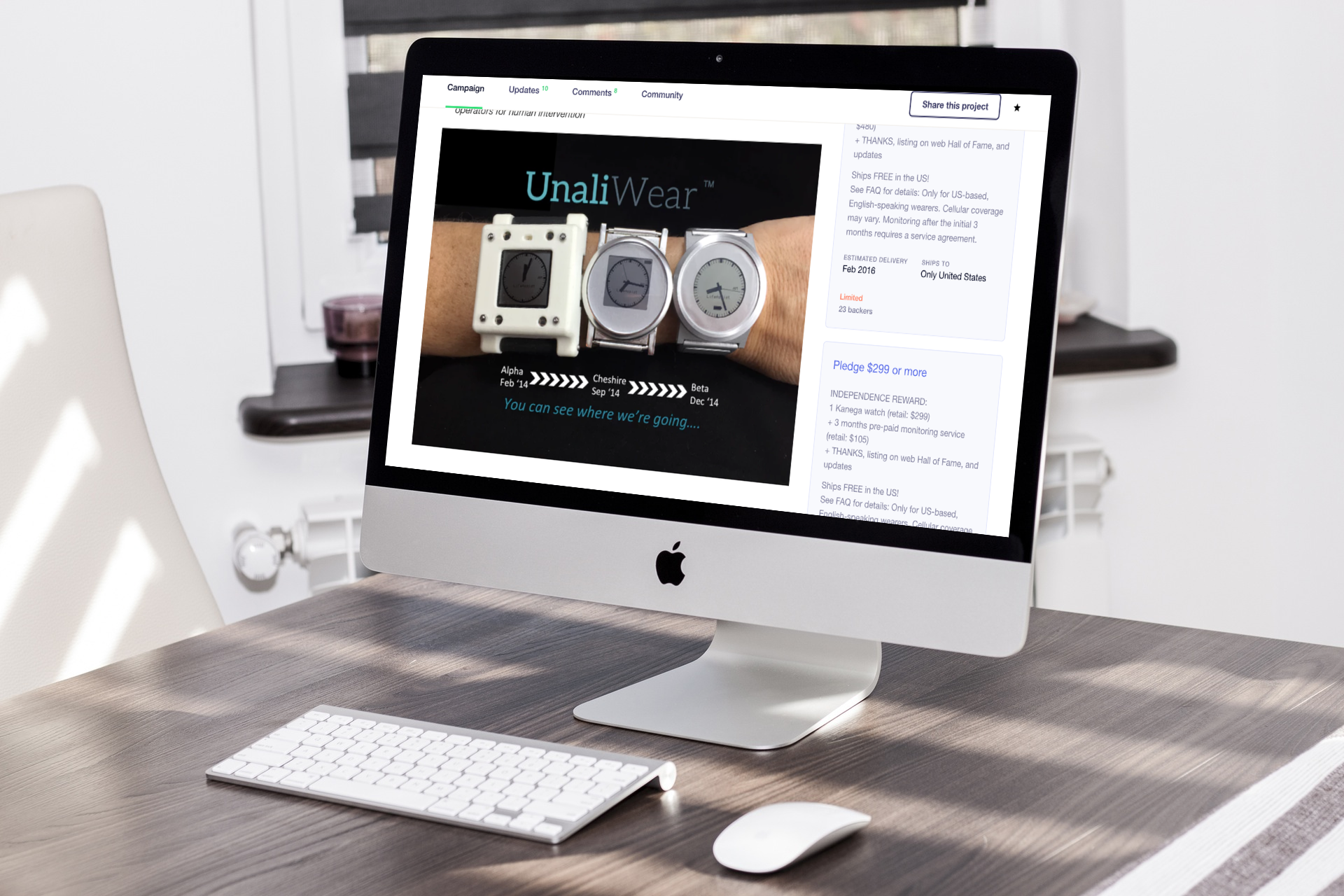 U gotta hear about Unali

UnaliWear created an “OnStar for People” with its new watch that’s essentially a Life Alert minus the embarrassing stigma. The Kanega watch is a voice-controlled wearable device that detects falls, provides medication reminders, and gives emergency assistance. According to UnaliWear, their product aims “to extend independence with dignity for millions of vulnerable seniors.”

Read also: Get a grip – wearables are not at all a dying fad

Wearables are further integrating themselves into the mainstream, moving away from fad status.

Like any new trendy technology, wearables have proliferated culture with awesomeness and trash alike. In 2014, one third of wearable technology was abandoned within six months.

However, those with staying power are propelling us further into a futuristic tech-laden world where our jewelry and accessories can assist us with simple needs.

Smartwatches started out as a laughable extravagance, but now they’re fairly common. I still geek out every time someone pays with their smartwatch, though. Unlike easily abandoned fad gadgets, UnaliWear seriously analyzed their product’s purpose.

CEO and founder Jean Anne Booth started the company in response to her mom’s refusal to use a Personal Emergency Response System like Life Alert. Booth wanted her mom to remain active, so she created a product that tackled the problems of products currently available on the market.

Many older adults don’t want to be associated with the stigma of personal assistance devices, yet want to remain independent.

WHY IS IT SPECIAL

UnaliWear’s watch is geared towards a specific demographic, addressing reasons older adults have traditionally steered away from wearables. For starters, many tech products for older adults are pretty darn ugly.

The Kanega watch doesn’t look like something out of a trite infomercial. It’s simply a discreet watch with smart features.

Another primary hesitation to wearables is ease of use. If a product isn’t intuitive or obviously useful, surprise, people won’t use it. UnaliWear’s goal of treating users with respect makes their product unique. The design team did their homework and really focused on the wearer.

So what does the watch do? According to their Kickstarter, “Kanega handles all daily intelligence for providing an unobtrusive continuous welfare check.”

The watch utilizes voice-control commands for its various functions. During setup, users speak with an operator to determine which functions fit their personal needs.

It won’t embarrass you in public by speaking aloud unprompted. It’s not looking to confuse or play Overseer to the wearer.

The Kanega watch also isn’t tied to a home-based system or owning a smartphone, and is waterproof.

This means wearers aren’t tied to their homes in order to use Kanega’s features. However, wifi must be present for the watch to function at full capacity.

Self-updating while you sleep

Machine learning and artificial intelligence updates lifestyle information while the wearer is sleeping.

This sounds creepy, but they use Verizon’s HIPPA-compliant cloud to keep health info secure.

This is how the watch connects with pharmacies to provide medication reminders.

Your very own Elvis

The watch can also pair with new generation Bluetooth Low Energy hearing aids, speaking directly to the user but not through the speaker.

For example, the creator’s mom named her watch Fred Astaire.

Right now the watch is still in product development. Kickstarter backers are expected to receive their watches sometime this spring, and general consumers will get access later in the year.

You can sign up to be a beta tester if you’re in the continental US. However, you must have wifi to register.

The Kickstarter version relies on the Verizon or AT&T network, and coverage is not available everywhere. Wifi access could definitely deter potential customers.

So far, potential connectivity issues seem like the only major problem users will face.

However, it’s important to note that the watch isn’t a replacement for a caretaker if needed.

The fall detection isn’t 100% infallible, and users must be willing to utilize the features.

“Kanega is designed to complement normal human forgetfulness; we can’t make you take your medications.”

The wearables trend is clearly not over.

Check out UnaliWear’s fully funded Kickstarter for a great example of a company winning at the wearable game.

In this article:gadget, Tech, The News