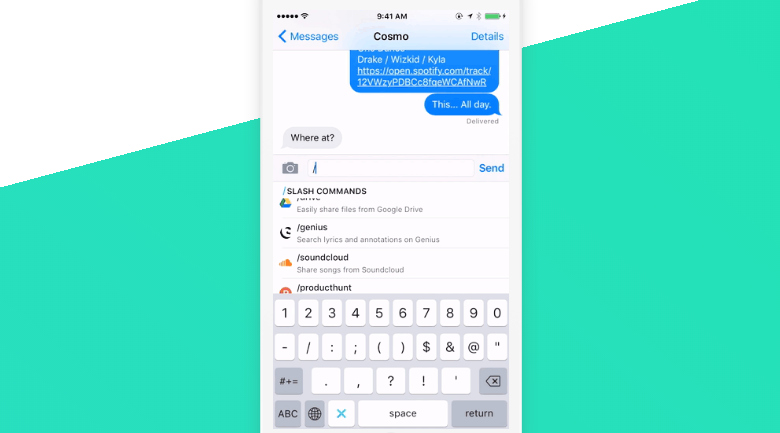 How is Slash any different?

There have been many third-party smartphone keyboards in recent years. Each tout its ability to offer something new in the way of making your life easier or with some added benefit. Though, as of yet, none have truly revolutionized the touchscreen keyboard. At least that was the case, until the release of Slash.

Read also: This insane wearable turns any flat surface into a keyboard

Unveiled earlier this year, the Slash Keyboard is still growing in popularity. The intelligent helper lets you search for and insert almost anything on the web into an email or text message, without changing screens. Anything from GIFs, stickers, YouTube, Foursquare, Contacts, Google, and others can be found instantly through the keyboard. The keyboard is integrated with a total of 15 apps, including its launch partner, Giphy.

Slash Keyboard is named after the way it utilizes the forward slash key to let you search other services. Simply tapping the big black forward-slash at the bottom of the keyboard opens up a handful of mini-search engines that you can use without having to leave the keyboard.

Type “/bars nearby” or “/foursquare diner” to look for places. If you want to tell a friend where you are, Slash can register your current location. You can even search and send links from Spotify and SoundCloud without leaving the app. Because everything happens from the keyboard itself, you no longer have to copy and paste or navigate complicated share menus.

This super-smart keyboard is also very fast, giving it a seamless integration into your current default keyboard. Plus, the keyboard is accessible the same way as other third-party keyboards and is easily downloaded from the app store.

While Slash launched with an array of popular linked services, it’s not stopping there. The third-party keyboard intends to keep adding new ones over time to make the app even more useful.

If you have an Android or iOS device, it’s worth downloading to see if it’s a fit for you (it will be). If you’re someone who communicates a lot by text, it’s a must.

How to add an unsend feature for your text messages

Could ScribblePost give Trello a run for their money?