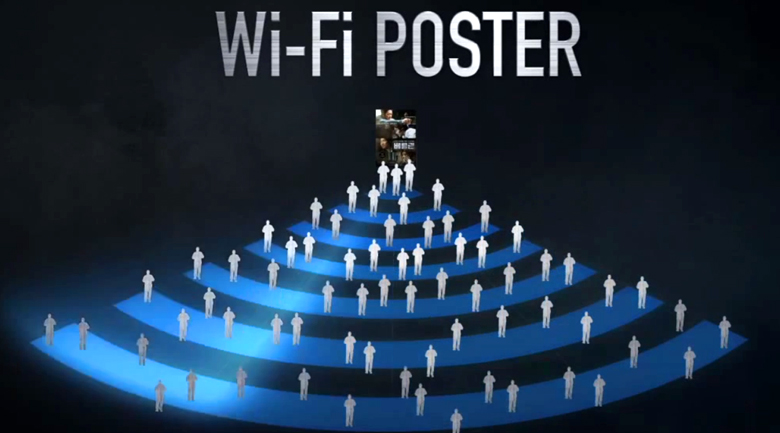 Wi-fi posters could mark a turnaround for print

In an effort to save the beloved but forgotten movie or even poster, South Korean film company, CJ Entertainment joined forces with popular ad agency, Cheil to create large movie posters that are also wi-fi hotspots, bringing the “world’s oldest” and one of the “least popular” ad mediums back to relevance.

People near the wi-fi posters see the available network just like any wireless network option, and it bears the name of the movie it is promoting. When users join the network, they are immediately taken to the movie’s official website where they can check out stills from the movie, full HD trailer videos, promotional events, and even buy tickets to see the movie.

The Wi-fi posters were installed in popular areas all over Seoul, and the ad agency says they helped to raise the movie’s website traffic by 28.5% and the users that came from the wi-fi posters spent 500 percent more time on the page than other users.

This project represents a major win for the film studio, as it also saw 60 percent advance tickets sold, one million viewers in three days, two million viewers in five days, and the movie remained number one at the box office for two weeks.

Marketers are trying endlessly innovative ways to make old tactics and methods new again, particularly by marrying them with digital technologies. While it is unlikely that movie wi-fi posters will become the norm, you will likely see more of this idea implemented at major conferences by vendors, but more importantly, this idea could likely be duplicated at major transit hubs and become a new revenue stream for public buildings as advertisers may want their name to pop up as the name of the wi-fi network and be the landing page for web users.

Video demonstration of the wi-fi posters: