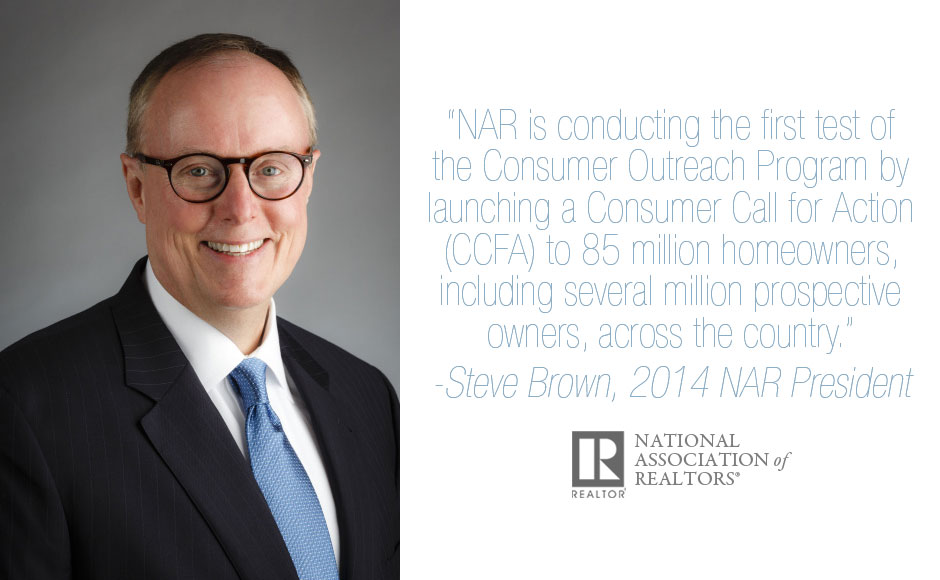 Since its launch four years ago, the National Association of Realtors’ Houselogic website has been collecting consumer data, that they will now officially be doing something with. NAR President Steve Brown has announced a Consumer Call for Action (CCFA), built on a strategic initiative the trade group has been working on for two years, asking consumers to sign a petition and/or send a letter to their House of Representatives member to fight to keep homeowners’ current deductions for home interest and local and state tax deductions.

Congress is currently discussing these deductions as part of a larger tax reform conversation, although no legislation is currently proposed.

In asking consumers to voice their concerns and help shape federal tax code reform, this marks NAR’s first ever test of the Consumer Outreach Program, reaching out to 85 million homeowners, including several million prospective owners. The CCFA will begin today and run until at least mid-July. This advocacy outreach to consumers is a part of NAR’s Strategic Plan and is being executed through the Community and Political Affairs Department utilizing REALTOR® PARTY advocacy tools.

It’s all a part of homeownership awareness

Brown said in a statement, “This consumer outreach will help us find out more about how we should communicate with consumers in the future. It is part of a concerted homeownership awareness, education and action campaign by NAR to demonstrate to homeowners that REALTORS® share concerns with consumers on issues relating to homeownership; and that REALTORS® can be counted on to articulate those concerns and stand up for consumers at the federal, state and local level.”

This is just the beginning

“A tremendous component of the Realtor Party program is truly communicating with the public about real estate ownership issues at all levels of government,” said Bill Malkasian, Vice President of Political Strategic Planning at NAR. “No matter if it’s educating the consumer on real estate issues or which candidates are real estate ownership supportive, consumer outreach is the future of advocacy.”

Malkasian added, “This first time nationwide consumer outreach call to action is just the beginning of how NAR will educate the public on issues relating to ownership of real property.”

NAR is in a unique position

Pennsylvania Association of Realtors’ CEO, and Realuoso editorialist, David Phillips adds his personal thoughts, noting that “This makes sense to me. NAR is the only advocate for homeowners and for years Realtors have been protecting their interests without any expectation of partnership or cooperation.”

“In today’s political climate, housing is under attack,” Phillips opines. “With this move, it sounds like NAR is looking for homeowners to help the fight to protect the interests of homeowners and private property rights.”

Being proactive with homeowners

“I’m thrilled NAR is taking the initiative to reach out to the consumer in such a proactive way,” said MRED President and Chief Executive Officer Russ Bergeron. “Building an alliance with homeowners and having their support on initiatives increases substantially the influence NAR wields in Washington, as well as on a state and local level. Glad to see them focusing their efforts in something that is in their wheelhouse.”

Some praise and a dash of criticism

Bob Bemis, Founder at Procuring Cause Advisors said, “This move to direct communication with consumers is a logical extension of NAR’s change in emphasis much more toward political advocacy and lobbying. In February, they changed the name of their spring conference in Washington DC, now calling it the ‘Realtor Party Convention & Trade Expo’ to highlight their efforts on capital hill. But they certainly recognize that a trade association can’t just do things, they must tell people what they are doing for them. Such activity is designed to show the consumer that Realtors are in their corner.”

Bemis also adds in a dash of criticism, noting that, “It’s interesting that not all of NAR’s actions are pro-consumer. In October last year they opposed a change in HUD rules that would prohibit dual agency in HUD short sale transactions. NAR opposed the rule change and got HUD to back down. Dual agency is illegal or unethical in every other profession that offers any kind of representation, yet NAR defends the practice vehemently. That posture, to me, is not in the consumer’s best interest and flies in the face of their professed support of homeowners and buyers.”