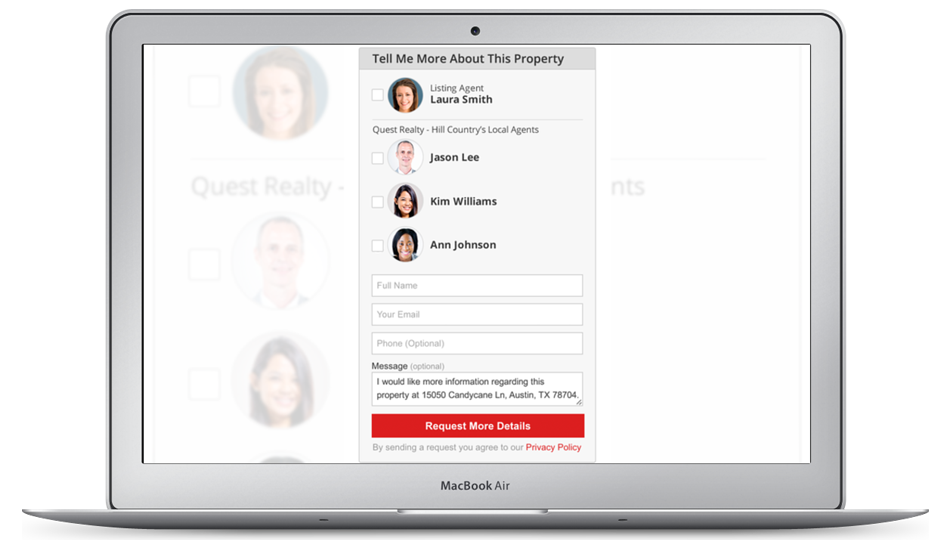 Right now as you read this, realtor.com is in private meetings with specific brokers’ agents, discussing a new ad concept that they tell us is in such an early stage that it can’t even be identified as a product.

The concept features agents from the same brokerage as the listing agent, right on the property’s lead form, instead of competitive agents in the same area.

The concept is being tested by partnering with seven brokers, beginning on July 22nd. The company says they will not be promoting the test with any marketing, rather gathering data on how consumers react to and interact with the feature they find organically as they search.

As shown in the image above, the lead form offers four agents, and each name is a clickable link to each agent’s realtor.com profile. Consumers can explore the four agents and select which of the four they are willing to be contacted by – the lead then goes to all four within the same brokerage.

Why consider altering the current offering?

There are two reasons for realtor.com to test out this method, one being altruistic, the other capitalistic.

Because they’re so early on in the process, no pricing structure has been set, but the most obvious reason for the concept is that the lead form is prime real estate (no pun intended), so brokers will likely be willing to pay more to feature their agents instead of a lead going to competitors on the figurative backs of their listings.

Russ Cofano, Senior VP of Industry Relations at Move, Inc. (which operates realtor.com), said that one driving force for this test concept is “the industry’s need to protect broker brands.”

Real estate listing sites featuring competitive agents on an agent’s listing has long been a contentious issue – could this shift appease the naysayers?

The less obvious, and more altruistic reason for testing this concept is that studies continue to show that many leads on real estate sites, be they portal or broker sites, go unanswered, and many of the responses to consumers come days after they’ve lost interest. The process is flawed and realtor.com is testing out a simple feature that could chip into this massive amount of lost opportunity for the industry.

Confano explained to us one stringent requirement they placed on the brokers testing the concept. “We gave brokers cart blanche to pick who the other agents are, but we did require that the other three agents must have had a recent transaction completed in the zip code [of the listing].”

Why such a relentless position? Cofano said the goal is to “create a scenario where listing agents and other agents can speak intelligently to consumers” about the neighborhood.

This attitude goes toward the altruistic side of this concept.

What’s next for this concept?

The test will go on for roughly three months, the company says, but asserts that there is no hard set date, as the goal is to acquire data and determine whether or not they’ll legitimize the feature as a purchasable product.

This serves as a reminder for real estate professionals to complete and customize their profiles in preparation for this feature to potentially become a reality.