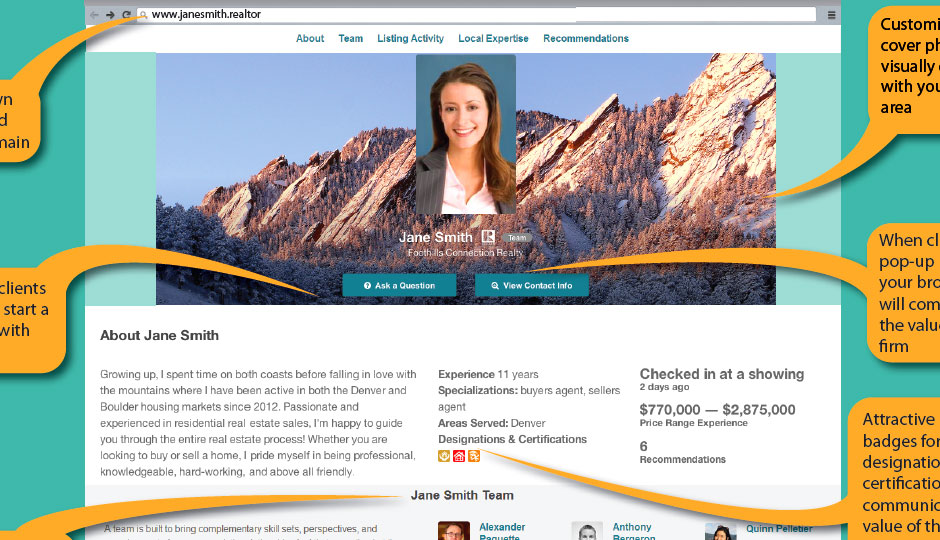 Find A Realtor has long been a feature on Move, Inc.-operated Realtor.com, and with the acquisition of SocialBios, the company initially launched AgentMatch as a standalone product, but it didn’t resonate with the industry, so they scrapped over 100,000 lines of original code and started from scratch to rethink and deeply research how consumers connect with agents, and have revamped the existing Find A Realtor feature in partnership with the National Association of Realtors (NAR) so it is no longer a dry directory, but a free profile each agent has control over and has a chance at actually converting.

First, although this product is not related, it is led by the same team behind AgentMatch, so let’s address the elephant in the room – the company tells us they learned these five lessons after shuttering the project:

Graham says Realtors wanted more, and wanted the company to do better, so through endless research and Advisory Board meetings, they listened and started from scratch.

Realtor.com is back up to bat

Graham notes that the company commissioned a three-month, third party consumer research endeavor and learned through thousands of interviews that quantitative and qualitative data top the list of consumers’ wants, and fascinatingly, team status and connections were less important to them than metrics like responsiveness and recommendations.

From the study, the company gleaned that consumers love content, and even on AgentMatch, they spent over half of their time in the actual profiles, not search. Further, they found that if an agent has a profile picture and basic information, the conversion rate went up ten times. “Content builds trust,” Graham said, and conversely, agents trust prospects that are connected to them, even if only through a profile. We suspect it is less blind-datey that way. The problem now is that consumers also want information that can’t be measured at present – how honest is an agent? What is their personality like?

So to answer to all of these challenges and questions, and with the understanding that content is critical, they will be relaunching Find A Realtor, and while Graham says that not all of the features are “fully baked” yet and that they’re still in listening mode with their constituents, they feel confident that they’ve created a way for an agent to express the unmeasurable data by emulating their offline persona.

Graham says the new profiles offer agents another way to “capture vitality” and show activity in a community rather than just quantifying closings, in a “set it and forget it” way so agents can plug in basic information and let it automatically pull info from other places into their profile, acting as a hub. Take a look:

We won’t rehash all of the features outlined above, but will now dig into some of the geeky details less evident in the graphic.

NAR asked their partner Realtor.com to power the “.realtor” top-level domains, and their creative way of doing so is by allowing agents to claim their dotREALTOR profiles for free, giving them a URL with their name (ex: “https://janesmith.realtor”), and will pick up the tab for hosting.

The profiles are being built to be reusable and portable, meaning that agents can use the profile on their own site or domain through an iframe or modal.

The profiles are completely mobile responsive, which means it will fit the screen of any mobile device without users having to pinch and zoom, which is more rare than you may realize.

“Set it and forget it”

Graham notes that SocialBios is powering the dotREALTOR profiles, and that in creating this product, they abide by the philosophy that agents are already online, so they examined how to allow agents to allow that activity to flow into the profile so it’s living and breathing, without requiring an agent to go create content on their profile. He calls it “set it and forget it,” and it is in line with modern products that allow automation from other social networks. It can pull in agents’ blog posts, Facebook status updates, microblogs, and so forth.

One of the most fascinating features is one you might have noticed – check ins. There are two types of check ins that are featured in the profile – third party and native. Agents can opt in to have their third party check in apps (like Foursquare) reporting to their profile automatically, which Graham says is critical because consumers want to know an agent is really active in the community and spends time in the neighborhoods to which they profess an expertise, even if it’s just a daily coffee run.

Native check ins will be done through Realor.com’s collaborative mobile app, wherein when an agent is logged in (so obviously the system knows it’s not a consumer, but an agent) a “check in” button appears next to a listing they’re currently at, and the check in is automatically sent to their profile. Check ins can be listing appointments, showings, open houses, and so forth.

To curb fraud, the app compares the user’s latitude/longitude with their phone’s GPS to verify that they’re actually where they say they are, only allowing a check in when at the address. Further, each check in automatically sends an email to the listing agent that another agent was there, thus completing a self-policing environment to reduce fraud. It also is an amazing way for new agents who are previewing to honestly show tons of activity in their market, and proving their knowledge before they even have their first closing (a tremendous argument against AgentMatch’s data set).

These check ins populate the agent’s profile with a feed of photos of the listings in chronological order to allow consumers to quickly peruse activity.

Recommendations in the modern era

Consumers want to research, and love data, so the new profiles take a different approach to offering recommendations, allowing agents to pull in recommendations from various sources like LinkedIn and RealSatisfied, but they take it even further, by allowing the agent to add media like photos and videos to enhance the recommendation.

Graham said that even when consumers know they’re just reading all positive, glowing testimonials, they still want them because they can better connect with an agent (and we suspect it is a form of affirmation for their potential choices (“it says my agent is the best in the world, just look!”)). But he also notes that recommendations is one area that is ripe for innovation, and they’ll be working on technologies to surface the un-quantifiable data like personality traits, likely through language analysis, so that if 20 out of 25 of an agent’s recommendations use the word “responsive,” they are probably responsive. This will continue to be a work in progress.

Aside from curbing fraud, the team asserts that they’ve tried to make this a fair way to feature veteran as well as rookie talent. They have a “non-zero policy,” because Graham says “there is no celebrating zero,” which means if an agent has no transactions, that portion doesn’t even show up, and if another agent has no checkins, that section doesn’t show up. Traditionally, systems say “0 closings this month” or “0 check ins ever,” leaving consumers to doubt, but eliminating the section from the profiles until there is something to “celebrate” is one way they’ve sought to add fairness to the system.

Even though as industry insiders, we all know what Realtor.com is, and it has tons of consumer traffic, many consumers visit the site expecting to find Realtors. Because of this and the learning curve of AgentMatch, Graham said, “We spent more time putting agents in a good light,” and as Martha Stewart says, that’s a good thing.

In this article:Breaking, Hot, Realtor.com