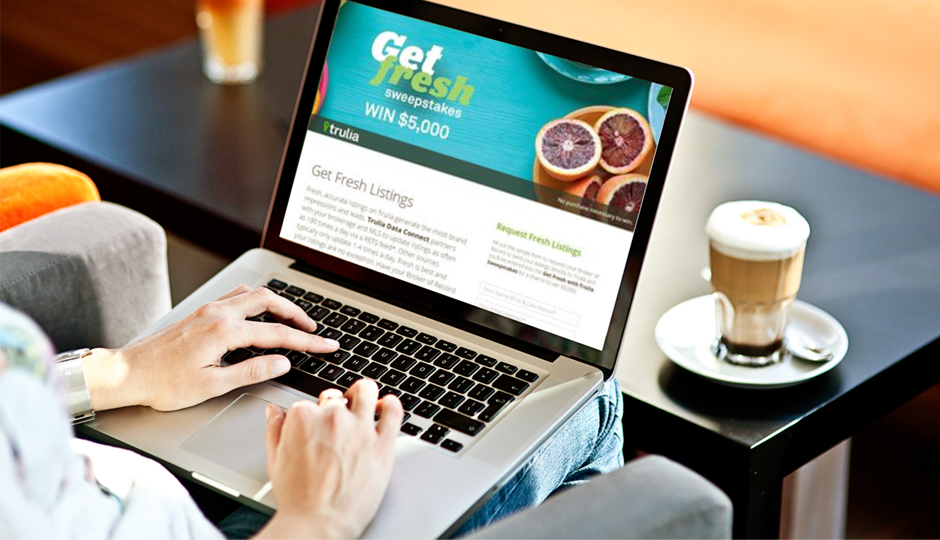 In a new campaign, Trulia is directly emailing agents of brokers whose feeds are not being fed directly to Trulia, asserting that it decreases listing accuracy. The emailer appears to be going to brokers as well, and states that “Fresh, accurate listings come from frequent updates. They generate the most leads. On Trulia, listings coming directly from an MLS RETS feed are updated up to 180 times a day, while other sources typically only update up to 4 times a day.”

Further, it urges recipients to “Take 5 minutes to authorize your MLS to skip third parties and send your listings directly to Trulia for faster updates and more leads.” Wow, that sounds extremely easy, right?

“Better yet, it’s free and you’ll be entered to win $5,000!” the company says, urging practitioners to visit their Get Fresh sweepstakes and MLS authorization page, which directs agents to enter their information and solicits their broker’s email address and information as well, offering an instant authorization to feed Trulia listings.

A handful of agents we spoke with felt that this was a shady way to approach agents that didn’t know how muddled the syndication issue is, but to us, it looks like one hell of a marketing campaign – show how easy it is to feed listings, and entice with a prize (Lord knows the industry is famous for loving a good drawing, just go to a Realtor mixer).

We’re intrigued by Trulia’s push in light of Zillow’s intentions to acquire them – loading up MLS feeds prior to the closing of the deal makes for a stronger partnership right out of the gate, will mean more talking points to issue at close, and a showing of their ability to remain an independent operation (as has been stated they will). Further, if enough agents are pressuring their broker indirectly by entering their information into the simple sweepstakes, likely triggering a “your agent wants to syndicate” type email, will brokers reconsider their position to not syndicate?

As a reader here, you’re well versed in the deeply complex issue of listing syndication, so what do you think – is this email a backhanded way to siphon off listings from unknowing agents, or is it one hell of a smart campaign that could yield big results?

Did News Corp just replace top Move execs, or is this a legal technicality?

Real estate brokerage REX Homes became famous in recent years for spearheading an anti-trust lawsuit against Zillow and the National Association of Realtors, accusing them of being a ‘cartel’ to edge out non-MLS participants. But it appears that as of today, the company has ceased operations.

Numerous staff reached out to us directly to indicate the company’s last day was Tuesday and that a companywide call on Friday outlined the end of REX Homes. While the entity of the brokerage still exists, we are told there are no longer offices, staff, leadership, or agents.

Staff at the Austin, TX and Woodland Hills, CA offices (both in Texas) have confirmed that as of today, the doors are literally closed. It is unclear what REX’s plans are for wrapping up any current contracts that haven’t closed.

The company’s website remains live with no notification of any service interruptions and there have been no changes to the faces that appear on the staffing page.

Many Glassdoor users have begun leaving reviews asserting that operations have ceased. To thicken the mystery, we’ve already seen several recent reviews disappear, but it is unclear if that is Glassdoor or REX’s doing.

Several LinkedIn users formerly employed at REX Homes are putting their #OpenToWork signs up, stating the company has closed – some indicate departments dissolving, others that the entire company has collapsed.

What has been especially interesting with this company is staff’s consistent fears of CEO Jack Ryan, consistently citing a fear of retribution not just professionally, but personally, and several told us we should worry about our own personal safety, having been the only news outlet covering REX’s unraveling.

Also consistent is that everyone we’ve spoken to in the last year has cited an imminent demise of the company as a whole.

In August of 2021, REX Homes laid off 60 staff without severance, and on October 7th, 2021, REX Homes had their second round of layoffs – both times, staff said they were not initially given severance pay, but report to us that after our coverage, they began seeing payment.

Also in October of last year, they shut down their New York and Chicago offices, and announced internally that they would be joining MLSs. They called it a restructure. The joining of any MLS shocked many as the premise of their structure was always that their magical proprietary tech as well as their bypassing of the MLSs to save consumers thousands of dollars.

They earned several rounds of private equity funding and never went public. Several staff told us that going IPO had been a talking point from Ryan, often used to lure them to the company in the first place and accept lower pay with the idea that shares would soon be coming their way.

Between the August and October layoffs, they closed their Series D round of funding, but never disclosed the amount, closing date, or investor. It is therefore unclear how their investors feel about the company’s status, but it is also possible that they’re who initiated the pulling of the plug.

It is also unclear what this means for their ongoing lawsuit against Zillow and NAR and how a non-existent company can pursue a class action lawsuit, but no filings have been made in the past week regarding the case.

As with all REX stories, we have reached out for comment. Because we track all emails, we have always seen them open every press inquiry within seconds, but it is of note that our current request for comment has yet to be viewed…

In yet another obscenely broad patent application, Zillow is aiming for ownership of the ability to fill out “transactional documents” electronically.

If that sounds familiar, it’s because virtually every website that allows customers to e-sign anything already does this. Some concerns also address the fact that services such as DocuSign – a service in which both Google and NAR invested – and even Google Forms might fall under this category.

Should Zillow see this patent approved, it could spell disaster for a huge operational segment of any real estate sale: the actual signing of a contract.

What’s odd about this patent application is the bizarre, gaslighting-lite language it uses to pitch the idea of something that is already used widely on the internet. In the background section, the patent claims that “Most of the time the parties are not in the same physical location when the offers, counteroffers, and acceptances are signed. Fax machines are often used to facilitate the process, as well as emailing scanned documents.”

The background continues with, “Sellers, buyers, and their agents are often not in the same contemporaneous physical location. Therefore, signed documents are often faxed between parties, with original signed copies being retained for the closing.”

Using the implied inconvenience of a physical fax machine as an argument for the efficacy of electronic documents makes sense, albeit in an obvious kind of way; however, using this argument to support the notion that Zillow should be able to claim a patent that gives them domain overall electronic forms in the real estate microcosm seems particularly villainous.

It’s also worth noting that, should this patent be granted any time soon, the likelihood that the world will still be in the grips of the COVID-19 pandemic is high. From the patent office’s standpoint, restricting the remote signature options of any real estate firm not affiliated with Zillow during a period of time in which purchasing property is already laborious and dangerous shouldn’t even be an option.

Time will tell whether or not Zillow is successful in achieving its bid for e-signing. Other document-signing services may be able to dispute the patent, but Zillow’s history of scooping up unlikely patents is undoubtedly on their side.

(REAL ESTATE) Stockholders are suing, alleging that Zillow publicly praised the iBuying program despite knowing it was dying, and they claim to “suffer significant damages.”

Zillow Group was hit late Thursday with yet another investor lawsuit on the heels of the collapse of their iBuying program (“Zillow Offers”). Hillier v. Zillow Group, Inc. et al in the Western Washington District Court is seeking class action status in this federal securities lawsuit, alleging that Zillow failed to disclose to investors that they did not have the ability to price homes for their Zillow Offers program, and that paired with a known supply and labor shortage, led to an inventory backlog.

The suit claims that under these conditions, Zillow (ZG) knew they would have to end the iBuying program, which would hurt their bottom line, something investors were not made aware of. In fact, this suit notes that company leadership continued to speak positively in public, making “materially false and/or misleading statements” about the program despite their overpaying for numerous homes and selling them at a loss.

In the Notice of Related Cases filed, Braua v. Zillow Group, Inc., et al., and Silverberg v. Zillow Group Inc., et al. were cited, both of which are seeking damages for allegations of misleading investors. The Hillier suit is specifically seeking to certify a class of Zillow stock buyers who made purchases from Aug. 7, 2020, and Nov. 2, 2021.

The new lawsuit outlines the following (our words, not theirs):

It appears that the crux of the Hillier case is that leadership continued to praise the program even as it declined, right up until the Q3 earnings statements went public and it could no longer sustain the program.

“As a result of defendants’ wrongful acts and omissions, and the resulting declines in the market value of the company’s securities, plaintiff and other members of the class have suffered significant damages,” the suit concludes.

As recently as this week, InvestorPlace said, “it’s going to be a while before ZG stock could make a comeback,” noting that Zillow’s house is not in order.