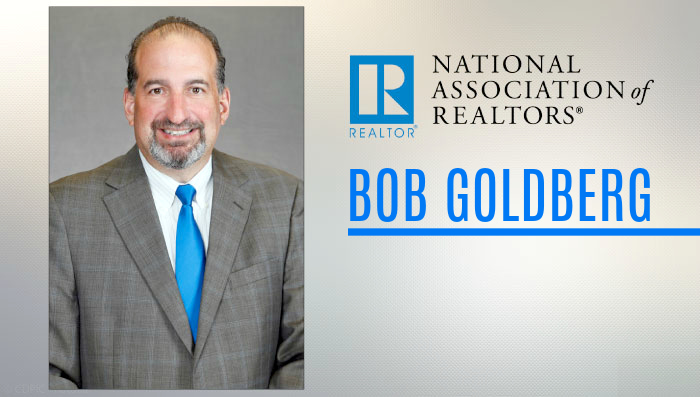 After nearly four decades at the National Association of Realtors (NAR), and 12 as CEO, Dale Stinton announced his retirement last year, and executive search firm Heidrick & Struggles was hired to recruit and vet candidates for the CEO position. 2015 NAR President Chris Polychron served as the search committee chair, 2003 NAR President Cathy Whatley served as vice chair, along with 13 other committee members.

Much of this year has been spent by the Realtor population wringing hands and speculating about who Stinton’s successor would be, and very late on Friday afternoon, media was notified that Bob Goldberg has been named as the next CEO of NAR.

Goldberg currently serves as NAR senior vice president of Sales & Marketing, Business Development & Strategic Investments, Professional Development and Conventions for NAR. He’s been with NAR for 22 years and has deep roots in real estate technology. Amber Taufen did a phenomenal profile on Goldberg’s background that is important for your knowing the context behind his being selected.

“Bob’s vision, business acumen and unique ability to successfully leverage NAR’s technology investments will ensure Realtors® remain at the center of the real estate transaction,” said 2017 NAR President William E. Brown, a Realtor® from Alamo, California. “With extensive knowledge of the association and real estate industry, Bob brings with him a strong track record for future-based thinking and enacting change, which is why the NAR leadership team is extremely confident in his ability to lead the association and membership to continued future success.”

“I’m humbled and excited to be named NAR’s next CEO,” said Goldberg. “This is a dynamic time for the association and the industry, and I am looking forward to my new role and working with Realtor® leaders and staff to advance the association and our members toward long-term success.”

What many people don’t understand from outside the halls of NAR is exactly how sophisticated and complex the association is, because wherever you sit and whatever you need from it – that’s what NAR is to you. And each person is different. We’ve been studying the organism for a decade and we continuously learn new things about its functions.

Few people understand the mechanism like Goldberg who has long been behind the scenes not only orchestrating, but developing out the very concepts that later become executed strategy.

In his current role, he’s responsible for brand and strategic marketing and association non-dues revenue, he guides a broad range of association initiatives including business development, strategic planning and partnerships, association product and marketing services and management, member professional development, competitive brand positioning, marketing, advertising and promotions, and group conventions. He also acts as SVP of administration for REALTOR® University, overseeing graduate school staff, day-to-day operations of the research center, curriculum development and budgets. He is also president and CEO of the REALTORS® Information Network, or RIN, an NAR for-profit and wholly owned subsidiary responsible for overseeing the realtor.com® operating agreement with Move, Inc.

“…Bob Goldberg stood apart because of his considerable understanding of and expertise in the many the issues facing the industry and NAR’s members,” said Polychron.

Why he’s the best CEO for the future

Our CEO (and my husband) is extremely finicky about who he takes his car to and has stuck with a veteran mechanic who has every certification available in his brand of car. And who can blame him? I’d rather take my second most valuable asset to the most qualified human possible instead of a fellow brand fanatic who reads blogs and forums every day and fancies themselves an expert because they can name every part of the engine and it’s 0-60 time.

In this scenario, Bob Goldberg is the veteran with oil under his nails, not the forum fanatic.

Why spell out this obviousness? Because in secret Facebook Groups, a very small handful of people have opined that someone who is a practicing Realtor would have been a better choice. Because in the secret corners of the web, people are saying this is more of the same (but when asked directly, they can’t always say what they’d like changed).

Others formed circles to apply social media pressure to insist on a female CEO, yet the committee instead sought out the best candidate regardless of gender (ironically, there was not pressure to name a minority as CEO, a differently-abled person as CEO, an LGBTQIA person as CEO, and so forth).

No transition is easy

Naming a new CEO to a local association with 5,000 members will never be without detractors, and these private conversations about a national CEO are much the same. The truth is that Goldberg is an overwhelmingly popular pick for CEO, and if you’ve ever so much has had a phone chat with him before, you’d know he’s wildly intelligent, and intimately knows every part of the organization (and therefore the context of how decisions impact each moving part).

Further (and I believe most importantly), he is a sincerely kind and humble person.

Goldberg is a trusted, steady, brilliant leader who will have no learning curve. None. It remains unseen what changes Goldberg will make during his tenure as the CEO, but he’s no forum fanatic, he’s a veteran that knows every facet of the organization.