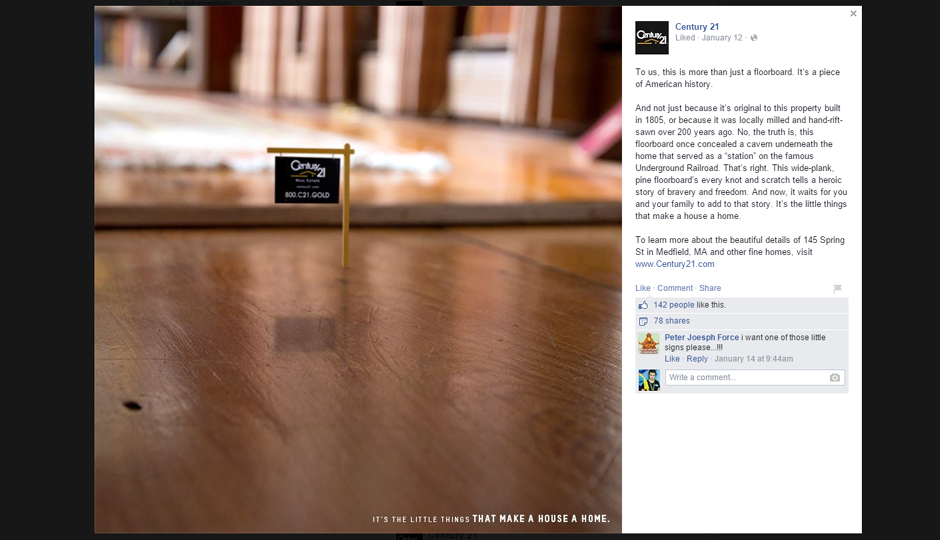 We don’t traditionally write about ad campaigns, because the truth is that everyone’s got one, and we’d bore you to death if that was our focus. But one campaign recently captured our attention, and we think it’s worthy of your attention. Let me explain.

Century 21 has crafted a clever little campaign on their Facebook Page, and I don’t use the word “little” as a term of condescension, no, the campaign is focused on little things. “It’s the little things that make a house a home,” each of the three images shared state clearly.

First, we’ll share the campaign below, then we’ll tell their story, and finally, we’ll express why you should care.

To us, this is more than just a floorboard. It’s

To us, this is more than just a fireplace. It’s

The national brand interviewed their New England area agents to discover a handful that had historical aspects that could be showcased. After narrowing it down, they found three gems worthy of sharing in a social media campaign, so they armed themselves with a quality photographer and off they went to show off the little things.

Matt Gentile, Director of Social Media at Century 21 tells us that social media acts as their lab to experiment, and that these trial images “may inspire larger efforts,” but he was more concerned with pointing out that anyone can slap up a picture of a a happy family moving into a home, but they dug deeper into what it means to be home.

Why you should care: pay attention, folks

Finding these stories like the floorboard that once concealed a station on the Underground Railroad proves a thoughfulness of a brand. Gentile asserted that this campaign doesn’t just convey the small things offered by homes for sale, but the value their sales professionals bring to the transaction.

We’ve long harped on the fact that the value proposition that real estate professionals bring to the table is service (negotiation, responsiveness), and C21 has echoed that sentiment in this clever little campaign.

You should care about this campaign because instead of beating the “it’s a great time to buy/sell” drum, or blindly focusing on being the “number one agent,” they’re telling consumers that the most important thing of all is their home. You see, anyone can offer a sign in the yard, anyone can become a buyer’s friend, and anyone can market like a boss, but the truth is that when the negotiations are over and the sign is pulled up from the yard, no amount of drip marketing will be more important than the life a homeowner will lead inside their home. They’ll mark their childrens’ heights in the doorway of the pantry, they’ll fondly remember their first upgrade in the home, laugh retrospectively at the time the washer flooded the first floor, and they’ll think back to all of the holidays celebrated in that home.