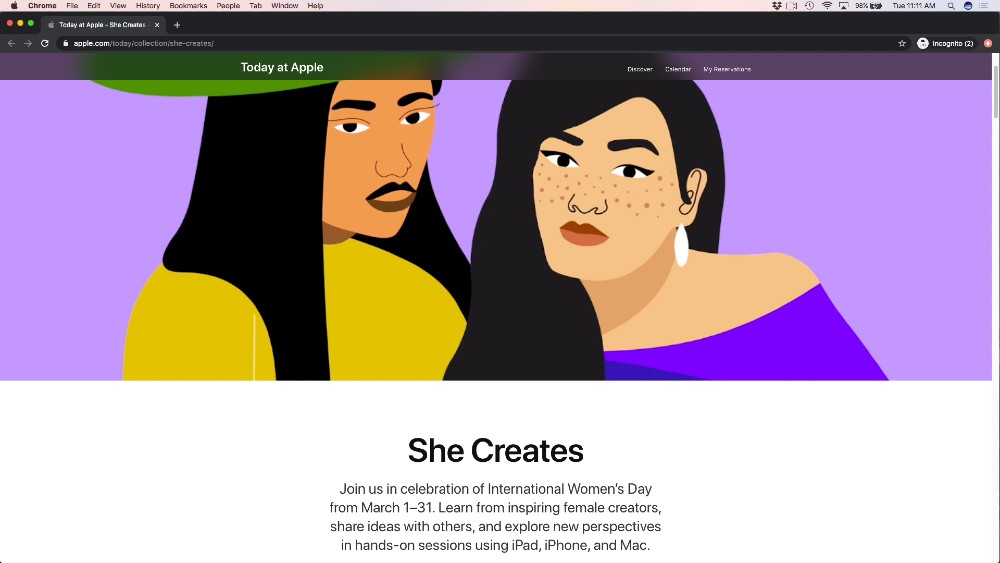 International Women’s Day is right around the corner (March 8), and the entire month will be spent honoring and celebrating women with Women’s History Month. Hopping aboard the honor train to celebration station is Apple, who will be holding Today at Apple sessions throughout the month to highlight the achievements of women.

Throughout the entire month, the public can join inspiring female creators in the She Creates series, which will offer new skills and perspectives. The hands-on sessions will involve use of iPads, Macbooks, and iPhones.

These events highlight women in tech, with sessions such as: “Photo Lab: Finding the Simple Good” with Priya Shah, “Exclusive: Own Your Brand” with Alani Figueroa & Aaron Philip, “Photo Lab: Natural Lighting” with Yvonne Venegas, to name a few. Other sessions look at products skills through use of Macs and a look at Augmented Reality experiences.

This is a continuation of Apple’s Today at Apple programs which hosts events and sessions each day at their stores around the world in an effort to both showcase artists, producers, and innovators, and also to teach and inspire those looking to learn more about the respective topic.

Sessions will be held around the world and can be found (and registered for) via the Apple Store app. Here are some of the locations that will be holding sessions:

This is not only fun for consumers and presenters, alike; it is also a great example of what marketing and publicity should look like for an organization. Utilizing the knowledge of those in your space and offering events and information that can’t be found elsewhere will set you apart from the competition. Additionally, it’s a great way to further answer the consumer question of, “okay, I bought your product. What do I do now?”