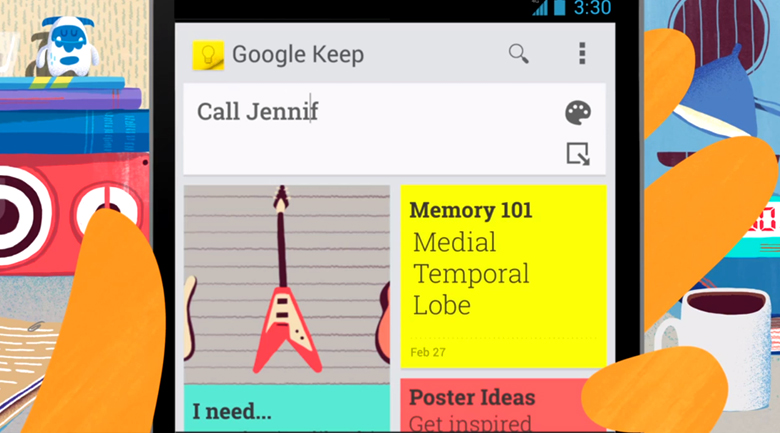 Google has launched what could become your second brain – Google Keep (on desktop and mobile app), which is a free tool that allows you to take notes, store voice dictation, and notes on photos, putting all of your thoughts in one spot while on the go.

Every item you add to Google Keep through your Android is synced and pinned to a browser based dashboard and color coded by importance so that you can review notes quickly. The interface is minimalist in nature, featuring a tile layout that includes a drag-and-drop function for rearranging your materials and other intuitive features.

Google Keep also has a simple search function so you can narrow down your notes, and it is compatible with devices running Android 4.0 operating system and above. Soon, the app will be available directly on Google Drive, tying the two together.

Go search Google for “Google Keep Evernote Killer” and you’ll see dozens of bloggers who have hailed it as a killer for the extremely popular Evernote. It’s not an unheard of concept that a new free product comes out and people come out of the woodwork to talk about how obsolete its competitor is, but Google Keep, albeit an awesome tool most of us on staff will use, is no Evernote killer. Take a deep breath, everyone.

Google Keep is a fairly simple, straightforward app that will ultimately integrate into Google Drive to make that even better, but it is nowhere near as sophisticated as Evernote, rather it is more similar to a sexier, synced version of notes apps that come natively with your phone.

No, Evernote has Penultimate, a handwriting app that remembers every artistic sketch or handwritten note, and it Evernote Clearly is a tool that reads articles out loud to you. Further, Evernote Hello is a contact manager on steroids, while Evernote Food remembers your meals and organizes data on them.

We suspect that Google Keep will be an amazing tool as it matures, but for now, it is primarily a prettier version of a note taking app that actually syncs with your Google account, which could be useful for Android users on the go. It will probably pick up some traction with people who weren’t already using Evernote, but the bloggers calling it an Evernote killer need to do some yoga, drink a chai tea, and look out the window at birds chirping to find their zen and calm down – Google Keep is just a tool, not a killer.

In this article:Evernote, google, google keep