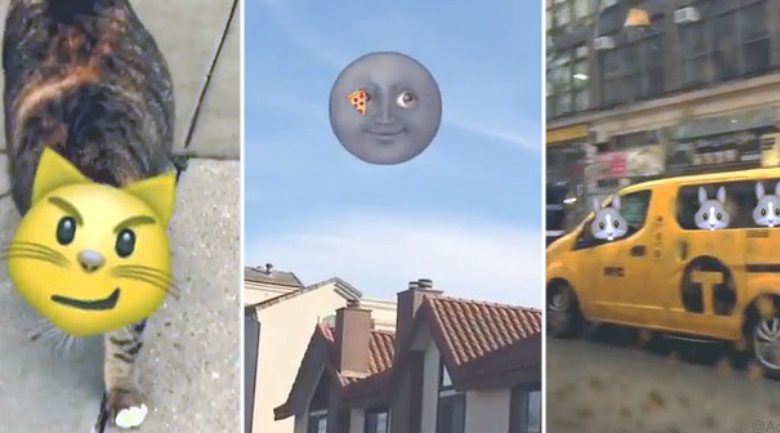 What began as a simple, self-destructing text message service has quickly become one of the most popular apps amongst young smartphone users. That’s because Snapchat continues to push the envelope by developing new innovations and adding features that inspire users to get creative with their visual-based messaging.

Snapchat has just come out with 3D stickers, bringing augmented reality increasingly into the mainstream, and into the hands of consumers.

Emoji yourself (or your cat)

Snapchat’s 3D stickers are emojis that you can “pin” to objects in a video. The emoji will “stick” to the object, no matter how it moves or how your camera moves. A sample video shows a smiley face emoji that remains planted over a pet cat’s face as is saunters about.

What’s more, emojis will change size to remain proportional if you zoom in or zoom out. Give yourself a pair of animated sunglasses, and they will get bigger and smaller, keeping a close fit to your face as you zoom in and out.

How to use 3D stickers

To use a 3D sticker, simply record a video, tap the sticker button, then drag to place the sticker over an object in your video. Lastly, long press the sticker to make it “stick.”

The 3D stickers use machine vision to recognize objects in the video, and track them as they move.

The use of machine vision on Snapchat is just another example of ways in which advanced digital technologies are starting to filter down to the masses, and into commercially available products and apps.

Currently for Android only

The new technology is available today for Android, and will soon be released for iOS. It appears that Snapchat was able to develop 3D stickers with the help of recent hire, Eitan Pilipski, vice president of engineering from Vuforia, and augmented reality technology firm.

It appears that Facebook is trying to stay competitive with Snapchat by acquiring animated lens maker MSQRD.