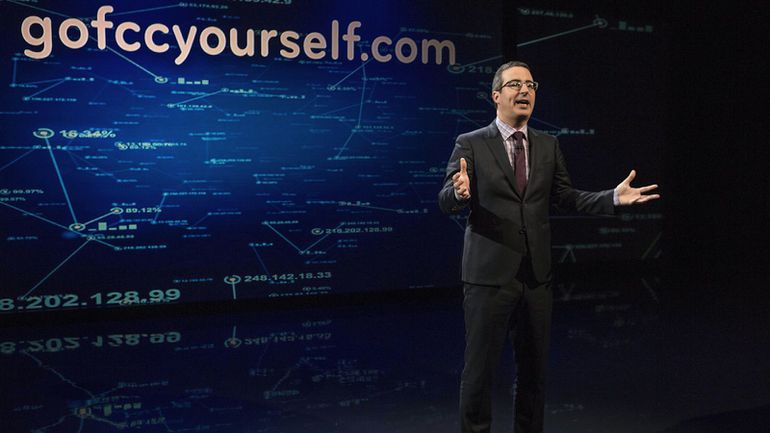 When John Oliver speaks, the people listen. Even if they don’t want to.

Oliver is known for his clever tactics to reach a wider audience than just those who religiously tune in to his weekly show.

In 2014, Oliver’s call to action urging viewers to contact the FCC straight up crashed their site from so much traffic. Now, he notes, “it seems once more, we the people must take this matter into our own hands because the FCC are once again going to invite public comment on their website.”

In his latest episode, Oliver urges viewers to leave comments on the FCC website in support of net neutrality.

This time around, he points out that “conveniently for them [the FCC], the process is actually a lot more complicated this time than it was three years ago.”

So step by step, Oliver details the unnecessarily complex process of commenting…then provides saving grace in the form of a new website: gofccyourself.com.

Yep. He bought a URL that will land you directly on the comment section page so you don’t have to go through all the hoops.

I went to the FCC site, and it looks like something that would give you a virus. There’s nothing about the form that looks welcoming to regular citizens wanting to express their views about net neutrality.

FCC is not making it easy

Had I not been guided through what to click, I would have thought I clicked spam. Like him or not, John Oliver does a stellar job at keeping people informed in an approachable way. He reaches people who may not be keeping up with the news through any other outlet.

As Oliver notes, “Net neutrality is objectively boring, and that used to work to ISP’s advantage. But more people know what it is now.”

Three years ago, the FCC listened to the overwhelming response and made steps to protect net neutrality.

Now it’s at stake again, and we can do something about. It’s incredibly important that we hold our elected official accountable for their actions and make our voices heard as citizens.

Visit the FCC site, leave a comment, call your representatives. Do something. Oh, and don’t pretend like you don’t have time.

Like Oliver said, “If the internet is evidence of anything else, it’s evidence that we all have too much time on our hands.”

In this article:fcc, john oliver, net neutrality, The News