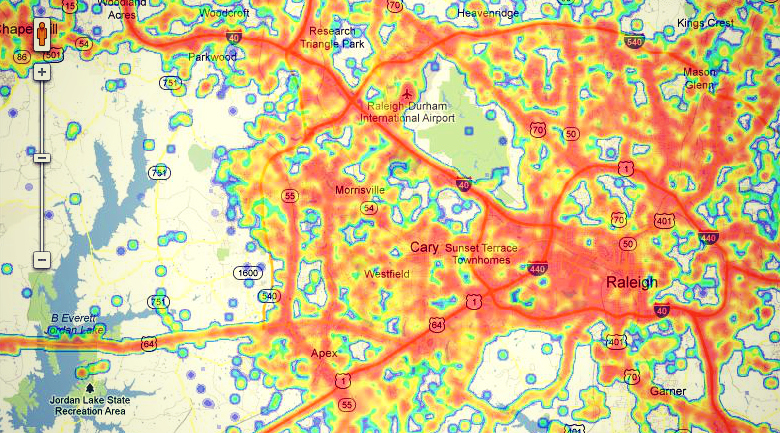 As a native Texan, I can tell you first hand that not all cell phone carriers are created equal, and driving in and out of the hill country will result in dropped calls, even today. Try getting any carrier to work inside of a stucco house surrounded by hills – it’s impossible. So what do most people do to learn whether a home they’re interested in buying or renting is in a spot their phone will work? Testing in person, which is far from a reliable measure, and looking at the coverage map provided by the carrier is, let’s be honest, a joke.

It’s more than an inconvenience, moving into a home with no cell phone coverage can be a safety issue, makes getting any work done from home impossible, and makes personal communication complicated.

Enter Open Signal, an Android app currently running on over two million devices, which is constantly detecting signal strength automatically, and mapping the trends of which carriers are reliable geographically, down to an individual street address. Anyone can visit the site and check out a map, filtering the map by carrier, as well as 2G, 3G, and 4G coverage.

OpenSignal writes, “If we want to know if a certain network provides coverage in our area we rely on coverage maps provided by that same network. To see how backwards this situation is just consider the analog in any other industry – Would you trust a restaurant review written by the head chef himself? Mobile coverage is too important to remain a black box.”

The company has announced they have released the first version of their API (application programming interface), and note they are actively seeking “developers who are interested in harnessing the data we collect in their own applications.”

When we learned of OpenSignal’s API, we wondered who would be the first to use their API to add a layer to their existing real estate search, allowing consumers to search by cell phone coverage, which would be particularly useful in rural areas or mountainous or hill country areas.

Lifestyle search already allows consumers to search most major real estate sites by schools, hospitals, restaurants, walkability, and more, but ask any warm blooded American if they would live somewhere that their cell phone couldn’t possibly work, and the answer will almost certainly be an emphatic “yes.”

So will Move, Inc., operator of Realtor.com, be first, or will the newly public Zillow and Trulia get to the finish line on a national scale? Or will it be a younger contender or an IDX company that offers it first? No matter who beats the others to the punch, we anticipate this could become a subtle, yet vital part of real estate search, allowing consumers to make decisions not only on housing, but determining which carrier to switch to should they fall in love with a home with poor coverage.

What is a CMS? Outlining details of the different types