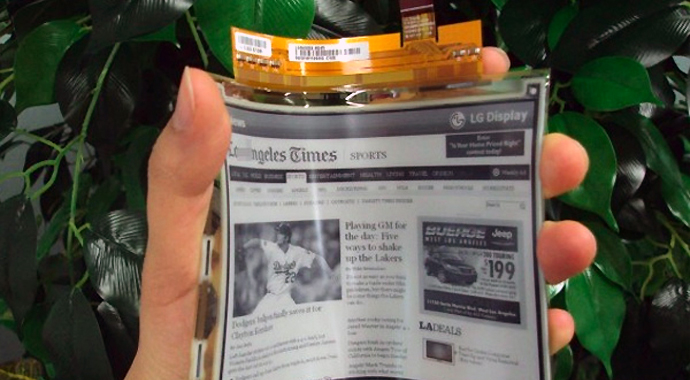 LG has announced it has begun mass production of its electronic paper display (EPD) product, and while there is no word on an American launch, the company plans to launch in Europe at the beginning of next month, according to ECN mag.

The LG EPD is not just flexible, allowing the screen to bend up to 40 degrees from its center, it is a 6 inch, 1024 x 768 e-ink plastic screen. The technology used mimics the way traditional ink appears on paper, which many prefer over the backlit flat panel displays of tablets and computers.

“With the world’s first plastic EPD, LG Display has once again proven its reputation for leadership and innovation with a product we believe will help greatly popularize the E-Book market,” said Sang Duck Yeo, Head of Operations for LG Display’s Mobile/OLED division in a statement.

AGBeat has shared with you many technology concepts that rely on the flexibility of screens, which until now has been little more than a concept.

Take for example the “User Feeling Option (UFO)” design concept that sits just at the intersection between phone, projector and television, all relying on the flexibility of a screen:

Then, there is the design concept that BlackBerry has invested in by designer John Anstasiadis that features a “smart” wrap around screen which can tell the difference between an intentional command and a hand holding the phone:

Also, Kunihiko Nakata’s Palette smartphone concept shown below is that of a wraparound smartphone that uses technologies that in 2011 we projected could realistically hit the market in 2012 – LG’s announcement puts production one step closer:

What about the odd concept combining a tablet, smartphone and lamp – WAVIEW that relies strictly on flexible screen technology:

Don’t forget the Samsung Galaxy Flexi Skin Android Smartphone concept, a flexible, ultra thin, powerful smartphone that acts as a phone, projector, a camera and more even though it is ultra bendy – we even admitted to having a crush on this device last summer:

The Rolltop laptop can act as a traditional laptop or be folded to become a full 17? touch screen. The cylindrical center acts as a base and has a power cord, speaker, USB port and webcam:

Then there is the very creative “Rollerphone” designed by Alexey Chugunnikov, which is more than a sexy futuristic bracelet watch, it works as a phone, media center and internet, much like smartphones, hello!

LG is not the only company working on flexible technologies, but they are the first to get to the masses, which makes some of the concepts that have been shelved one step closer to being possible. Flexibility is here, and it is one of the biggest innovations that will go mainstream in the next 24 months and make us all feel a little bit more like we’re Marty McFly in the future.