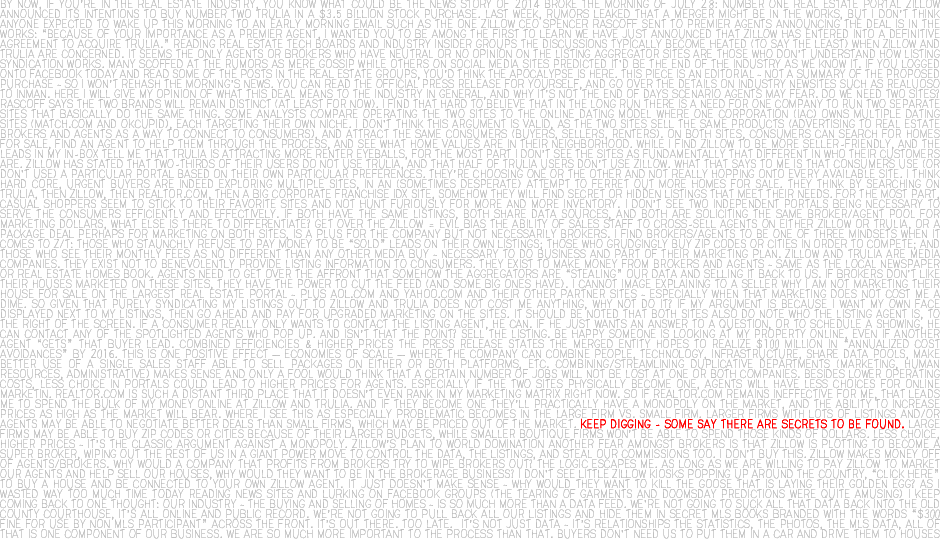 I know, I know – you’re probably sick of hearing about Zillow. It’s been one week since the jawdropping announcement that Zillow is buying Trulia and it seems you cannot log onto Facebook or read an industry news site without reading one more opinion of the proposed stock buyout. While some have questioned if the federal government will allow the plan to move forward, citing potential anti-trust issues if real estate portal giants number one and number two combine forces, another anti-trust issue surfaced this week.

Recently, HousingWire published an article stating that Citron Research shows that the combined super syndicator may not be all it’s cracked up to be from a financial investment standpoint. The article calls the new entity a “Potemkin village” built to impress and exaggerate how good things are in Zulia-ville, and not a true superpower destined to dominate the real estate portals.

In “Zuliagate – The Big Secret,” Citron Research states that “the combination of Zillow and Trulia is supposed to give the combined entity the power to triple ad revenue from real estate agents. Nothing could be further from the truth — and we have the proof.”

Citron’s smoking gun is a 60-page slide presentation originating from a Coldwell Banker office (Coldwell Banker Pacific Properties in Hawaii) encouraging its agents to sign up for a special marketing package called Fab Plus.

For a ridiculously low price ($350 per year, and only $175 for the first year if you signed up by an April 15, 2014 deadline) agents would receive “Featured Agent Branding” which includes (from slide 52):

Agents were promised from $2100 (agents with only a few listings) to a $23,000 value in advertising (for power listers with 100 listings) – for $175 for the full year. If you’ve bought any featured listing packages on these portals, or paid for upgraded marketing status, you know that you aren’t likely to buy even a fraction of a low scoring zip code in most areas for the pittance these agents were promised for that price.

Citron’s article states that Coldwell Banker is not the only real estate franchise offered such steep discounts on marketing packages. Sotheby’s, ERA, Century 21 and Better Homes and Gardens – all of which operate under the Realogy umbrella – received the same 95% discount off book rate. Realogy operates the five brands as separate franchise, with almost 6000 offices and over 170,000 agents. To say Realogy has some pull with negotiating marketing deals with the listing portals would be a major understatement.

Citron asserts that Realogy is the true danger

So, while people opined last week (me included) about the pitfalls of a giant Zulia controlling the market and potentially raising prices for agents and brokers, Citron asserts that Realogy is the true danger in this scenario, as it was marketed to their agents specifically to “Block competitors from advertising on your listing details page.”

For less than $15 per month, Realogy agents can assure they are the only point of contact on their own listings. The flip side is that Zillow/Trulia cannot sell those buyer leads to any other agent in their system. Meanwhile, Citron states that Realogy is investing serious dollars in their own real estate portal, as the company realizes that the best leads – most qualified – come from the corporations own sites, not outside portals.

If Zillow/Trulia try to raise prices on featured listing status, using their pricing power as feared, Realogy could terminate the agreement, throw its support towards its own portal, and even pull their listings with few repercussions.

Wall Street has not done its due diligence

Zillow stock is up 87% in the past 6 months ($144.81 close on 8/4/14), while Trulia is also up 87% in the same time period (yes, a freaky coincidence – and close of $60.98 today). The paper asserts that Wall Street has not done its due diligence with this deal, and instead of jumping on the Zulia bandwagon and driving the stocks higher, analysts need to dig deeper.

The paper ends with a scathing assertion: “Citron could publish volumes regarding internet traffic overlap, regional MLS strategies to adjust to / compete with Trulia/Zillow, customer backlash, and every other red flag raised about this company. But none of it matters if you have an undisclosed business practice, one that you have been hiding from Wall Street, that just torpedoes your own business plan.”

UPDATE: Zillow tells Realuoso, “Citron is a firm run by a short seller that publishes self-serving propaganda. We don’t engage with unethical practices of this type. As for Realogy, we have an advertising deal with them. We don’t get into the specifics of individual deals – we never have. The math in the Citron report is not correct.”