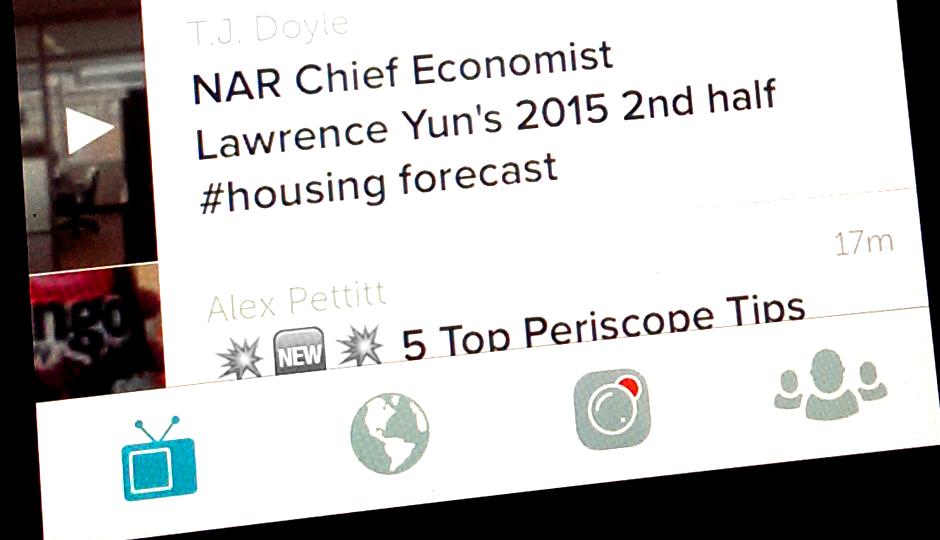 If you’ve been online any time in 2015, you’ve probably heard of Twitter-owned Periscope, an app that lets anyone broadcast video, live for the world to see. It’s still a young app, and marketers are in the experimental phase with how to reach the growing audience.

While you can see a replay by downloading the Periscope app and locating @NARsocial (done by clicking the people icon at the bottom right of the app, searching for “NARsocial,” and following the account run by NAR Social Media Director, T.J. Doyle), there is not yet a way to embed the feed here.

Below is a terrible shot taken of the broadcast as it ended:

What NAR did well

Periscope is still filled with cell phone quality video, a lack of inspiration and creativity, and a generally bored feeling (there are a lot of “how to Periscope” and “what I’m eating right now” broadcasts), but as more brands like NAR experiment with using it for professional reasons, the tone of the community will eventually change, just as Twitter did.

What NAR (or more specifically, T.J. Doyle) did well is keeping the conversation concise and on point. The broadcast could have been an hour filled with interesting data, but Doyle filmed his walk into Dr. Yun’s office, showed the viewers around, and began interviewing, much like a fireside chat.

They filmed Dr. Yun’s computer screen, but when the glare proved to be too difficult to capture, Doyle directed viewers to where they could find them. Perfect.

In just ten minutes, any viewer was able to feel like they were right there in the NAR offices, getting the latest economic data, with a semi-casual tone that is approachable to a wider audience. Kudos to the social team at NAR for expanding the possibilities of Periscope.