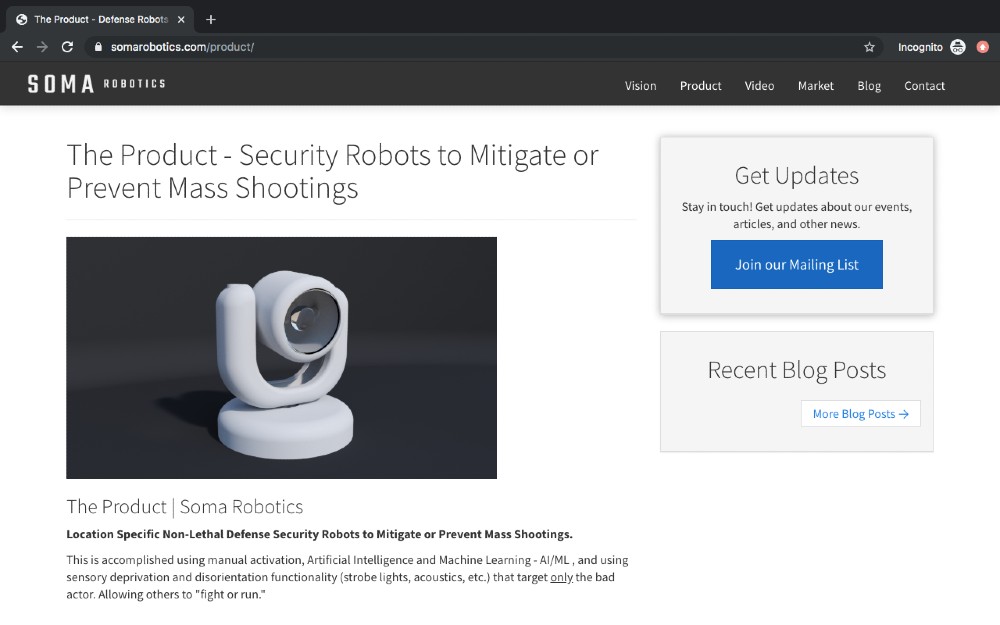 In an age where everyone is separated in the debates between the security and the rights of the American people’s future, there is a company out there who is looking to upgrade our security systems to combat with the current issues of today with technology.

SOMA Robotics, a houstonian company at heart, has built a security system “using non-lethal AI (artificial intelligence) powered technology” with MI (machine learning), to allow these situational victims a chance to either “fight, or hide, or run”.

According to their website, the system essentially engages with the attacker through a blinding spotlight that then follows them much like a real spotlight on a stage. Although this system might not be the end of all new-aged attacks, it can at least be a mitigator of the impact these attacks have on their victims.

To be as blunt as possible, “at the end of 2019 there were 417 mass shootings” of which “31 were considered to be mass-murders” stated CBS News. 2019 was reported to be the year with the highest rate of mass shootings.

It seems SOMA Robotics is actively trying to lower those statistics, at a time when, sadly, this is a huge public safety issue impacting over 39,000 people in 2019 alone, posted Gun Violence Archive. I would even say, SOMA Robotics is tired of seeing “Thoughts & Prayers” on social media, and trying to put up a fight for us since we cannot agree on how to protect ourselves.

Currently, SOMA Robotics’s Founder and CTO, Ed Schipul, is seeking investors to support their mission of “peace of mind”. In a posted interview on SOMA Robotics’ website, Schipul discusses how this technology could be a “game changer” for “soft-targets”,places like schools and airports.

Schipul even discusses how hopefully the costs to the product is inexpensive enough to all others to affordable purchase this technology, and even possibly releasing the open-source code for others to use.

Staff Writer, Kaiden Gray has experience in product management, strategic planning for non-profits, and can get through a series in a week on Netflix. He has traveled to over 20 countries, and when he's not in between flights, he's busy learning about the mysteries of the universe.

How to personalize your site for every visitor without learning code

(TECH NEWS) This awesome tool from Proof lets you personalize your website for visitors without coding. Experiences utilizes your users to create the perfect view for them. 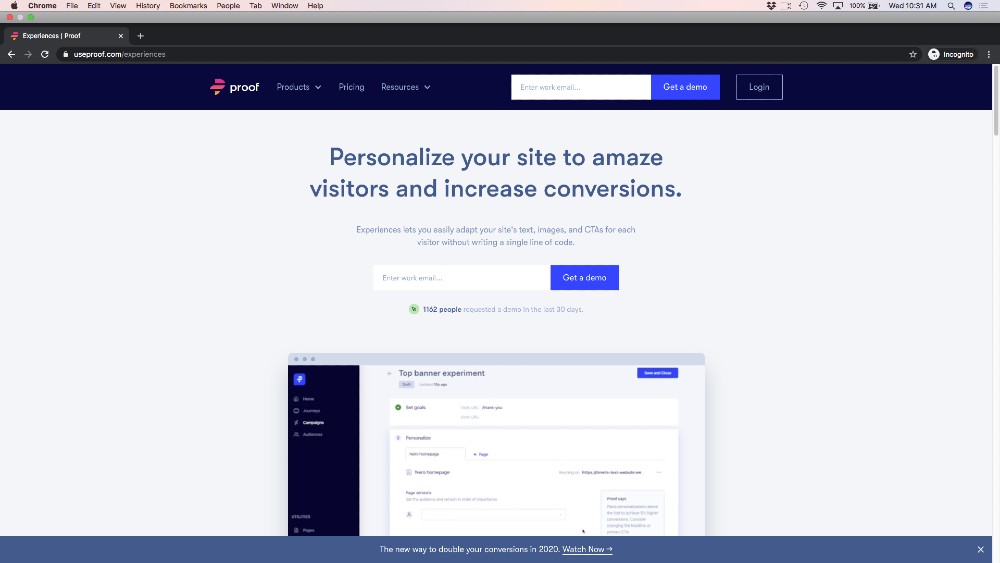 What if you could personalize every step of the sales funnel? The team over at Proof believes this is the next best step for businesses looking to drive leads online. Their tool, Experiences, is a marketer-friendly software that lets you personalize your website for every visitor without coding.

Using Experiences your team can create a targeted experience for the different types of visitors coming to your website. The personalization is thought to drive leads more efficiently because it offers visitors exactly the information they want. Experiences can also be used to A/B test different strategies for your website. This could be a game changer for companies that target multiple specific audiences.

Experiences is a drag-and-drop style tool, which means nearly anyone on your team can learn to use it. The UX is meant to be intuitive and simple, so you don’t need a web developer to guide you through the process. In order to build out audiences for your website, Experiences pulls data from your CRM, such as SalesForce and Hubspot, or you can utilize a Clearbit integration which pull third-party information.

Before you go rushing to purchase a new tool for your team, there are a few things to keep in mind. According to Proof, personalization is best suited for companies with at least 15,000 plus visitors per month. This volume of visitors is necessary for Experiences to gather the data it needs to make predictions. The tool is also recommended for B2B businesses since company data is public.

The Proof team is a success story of the Y Combinator demo day. They pitched their idea for a personalized web experience and quickly found themselves funded. Now, they’ve built out their software and have seen success with their initial clients. Over the past 18 months, their early-access clients, which included brands like Profitwell and Shipbob, have seen an increase in leads, proposals, and downloads.

Perhaps the best part of Proof is that they don’t just sell you a product and walk away. Their website offers helpful resources for customers called Playbooks where you can learn how to best use the tool to achieve your company’s goals be it converting leads or engaging with your audience. If this sounds like exactly the tool your team needs, you can request a demo on their website.

Not just for gaming: How virtual reality can save PTSD patients

(TECH NEWS) Thanks to its ability to simulate situations safely, virtual reality technologies are proving effective in therapy for PTSD patients.

Over the last year, a great many people have developed a new and sometimes dangerous relationship with a new emotional state, anxiety. I know that personally I’d never had a panic attack in my life until the middle of the pandemic. For many these emotions have taken the form of actual disorders. Actual mental influences which affect everyday life on a large scale. One of the most common forms of which is PTSD.

This disorder has many different aspects and can affect people in a number of different and debilitating ways. Finding treatments for PTSD patients and other anxiety disorders – especially treatments that don’t involve drugging people into oblivion has been difficult.

A lot of these disorders require exposure therapy. Putting people back into similar situations which caused the original trauma so that their brains can adjust to the situation and not get stuck in pain or panic loops. But how do you do that for things like battlefield trauma. You can’t just create situations with gunfire and dead bodies! Or can you?

This is where VR starts coming in. Thanks to the falling cost of VR headsets, noted by The Economist, psychologists are more capable of creating these real world situations that can actually help people adjust to their individual trauma.

One therapist went so far as to compare it to easy access opioids for therapy. This tool is so powerful that of the 20 veterans that they started with, 16 of them no longer qualify for the categories of PTSD. That’s a 75% success rate with an over-the-counter medicine. I can think of antihistamines and painkillers that aren’t that good.

I’ve grown up around PTSD patients. The majority of my family have been in the military. I was even looking at a career before I was denied service. I have enough friends that deal with PTSD issues that I have a list of things I remember not to invite certain people to so as not to trigger it. Any and every tool available that could help people adapt to their trauma is worthwhile.

(TECH NEWS) If you struggle to keep your inbox clean thanks to a multitude of emails, the widget “You’ve Got Spam” could provide some petty catharsis.

We’re all spending a lot of time behind our computers and inside of our inboxes these days, so it makes sense that some people—not naming names—might be sick of seeing several unsolicited emails a day from marketers and other unsavory businesses.

While we can’t recommend a mature, adult solution that hasn’t already been beaten to death (looking at you, “inbox zero” crowd), we can recommend a childish one: Signing solicitors up for spam.

If you do decide to go the petty route, “You’ve Got Spam”—a free email widget from MSCHF—has you covered. Upon installing the widget, you can configure it to respond automatically to incoming cold-marketing emails with tons of subscriptions to spam sources, thus resulting in overwhelming the sender with a crowded inbox and cultivating a potentially misplaced sense of catharsis for yourself.

The widget itself is fairly simple: You only need to install it to Gmail from the MSCHF website. The rest is pretty self-explanatory. When you receive an email from a person from whom you can safely assume you’ll never be receiving favors ever again, you can open it and click the “You’ve Got Spam” icon to sign the sender up for spam lists galore.

The developer page does fail to make the distinction between the promised “100” subscriptions and the “hundreds of spam subscriptions” discussed on Product Hunt. But one can assume that anyone who dares trespass on the sacred grounds of your squeaky-clean inbox will rue the day they did so regardless of the exact number of cat litter magazine subscriptions they receive.

Of course, actually using something like “You’ve Got Spam” is, realistically, a poor choice. It takes exactly as much effort to type, “We’ll pass – thanks!” as a response to anyone cold-emailing you, and you’re substantially less likely to piss off the actual human being on the other side by doing so. Services like this are heavy on the comedic shock value, but the empathy side tends to lack a discernible presence.

That said, if you absolutely must wreck someone’s day—and inbox—MSCHF’s “You’ve Got Spam” is a pretty ingenious way to do it.